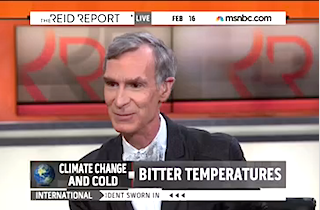 In a promo this past week, Fox News mockingly promised to explain “Why global warming isn’t stopping the snow falling.” But Bill Nye “the Science Guy” thinks all TV news — not just Fox — could do more to bring the issue of climate change into its everyday coverage, including when it’s cold outside.

“Why should we care that it is cold in the winter?” MSNBC’s Joy Reid said Monday after a report on freezing weather hitting a large portion of the country this week. “Well, for one thing the unusual nature of some of the temperatures does raise, or should raise questions about climate change.”

Joining her, Nye warned, “Let’s not confuse or interchange climate change with global warming,” noting that when the climate changes, “some places get colder.”

Pointing out that MSNBC is regarded a “progressive” news organization and he was probably preaching to the choir, Nye added, “I will say to the conservatives, we need you. This is to say we can’t have everybody be a progressive liberal bleeding heart and so on. We need people on both sides. But if the conservatives are going to continue to deny what 90% of the scientists in the world are saying, we’re not going to reach a consensus and make progress.”

To those who ask him what they can do about climate change, Nye said, “Just talk about it. If we were talking about it, we’d raise awareness and get to work and I, as a guy born in the U.S. would like the U.S. to be leading this effort.”

Nye’s media criticism echoes that of Bill Maher, who used his “New Rule” on Brian Williams this past week to accuse the anchor of “journalistic malpractice” urge all three network evening news broadcasts to “link your endless weather stories to climate change.”