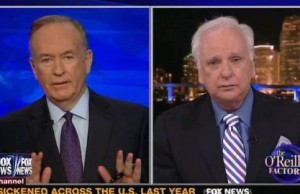 Bill O’Reilly opened his show tonight reacting to how softly Hillary Clinton was handled by the media following her testimony on Benghazi earlier this week. O’Reilly and guest Bernard Goldberg agreed that the media is fawning over Clinton just as much as they have fawned over President Obama for the last four years. Goldberg told O’Reilly that it ultimately does not matter how many people raise cain over this because journalists today lack an “embarrassment gene.”

RELATED: Reporter On Obama’s ‘Amateurish’ Press Corps: ‘When They’re Near Him, They Lose Their Minds’

O’Reilly touted comments made by Rolling Stone reporter Michael Hastings to highlight just how sycophantic the media has been in covering the Obama administration, and this wee in particular, Clinton’s Benghazi testimony. After showing clips of the nightly newscasts covering Clinton’s testimony, O’Reilly quipped, “All we need is the theme from Rocky, right?”

Goldberg told O’Reilly that four years ago, the media “fell in love” with Obama and were practically “slobbering over him,” and now in anticipation of 2016 the media is getting an early start “slobbering” over Clinton. He admitted that it does not matter what anyone on the right thinks, because many journalists these days were born without an “embarrassment gene.” Goldberg cited ABC News’ Martha Raddatz, who gave Clinton credit for saying she takes full responsibility, and argued that a more skeptical reporter would not have simply accepted it.

O’Reilly then brought up Obama and Clinton’s joint interview on this Sunday’s 60 Minutes with Steve Kroft. O’Reilly minced no words in declaring that Kroft is America’s “last hope” for people to get answers on Benghazi. Goldberg expressed hope that Kroft would ask the right questions, suggesting that he should ask Obama if he feels embarrassed by how much the media slobbers over him.