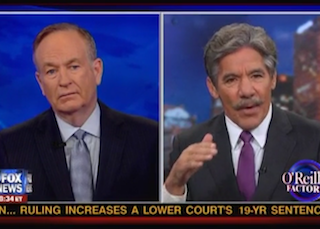 One thing that remains clear from this discussion on The O’Reilly Factor: Bill O’Reilly and Geraldo Rivera do not agree on solutions to help the poor. The two began a conversation prompted by Mitt Romney “misspeaking” about his concern about the poor, and took a turn towards solutions for them, before O’Reilly and Rivera began to disagree on requirements for birth certificates.

RELATED: John Bolton Doesn’t Think It’s In The United States’ ‘Interest To Stay Out’ Of An Israel-Iran War

O’Reilly noted that “President Obama has set up a class warfare situation” that positioned “Romney or Gingrich as the mean guys.” Rivera replied that he agreed with a metaphor Newt Gingrich used: rather that a safety net, “a trampoline,” because “we don’t want people nestling on the bottom.” O’Reilly replied that the problem with poverty is that “most poverty is driven by personal circumstances,” which means “mothers who get four or five illegitimate children before they’re 23 years old.

The conversation then took a bizarre turn, where Rivera began to demand “a father’s name on every birth certificate in this country.” O’Reilly disagreed because “you have NFL players who have 9 illegitimate children in 8 states!” and this is “the poverty driver.” The also disagreed on public education, where Rivera tried to argue that children are owed a good education, but O’Reilly countered that America has the “second highest spending on education in the world,” after Switzerland, “and “they only have eighteen kids there.”

O’Reilly and Rivera ended in disagreement on ending poverty, as Rivera demanded that society “tell inner-city dads to pick their pants up, be men and provide for their children.” “They’re going to say ‘blank you, I want to use cocaine!'” O’Reilly replied.