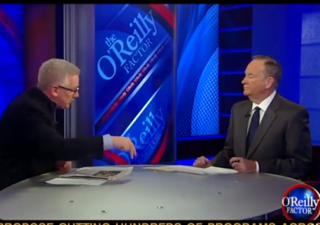 The dynamic Bill O’Reilly and Glenn Beck have developed during their “casual Friday” meetups on the Factor is typically this: Beck proposes the political theory he has been most promoting on his program that week and O’Reilly does his best to knock it down. This week, however, O’Reilly was particularly aggressive against Beck’s belief that the revolts in Egypt were partially driven by communist forces looking to foment global revolution.

Beck got the ball rolling by proposing that the overthrow of Egyptian president Hosni Mubarak was “the beginning of the coming insurrection,” and that “this is going to happen from one country to another.” Raising an eyebrow to the sky, O’Reilly begged to differ, but only after needing a bit of clarification. “You see this as a communist driven thing?” he asked skeptically, and when Beck answered that the communists were only one piece of the puzzle, O’Reilly countered that “most people sat out” the Egyptian protests and the threat of a global revolution appeared slim to him: “I don’t see the constituency.” Beck pushed on, however, arguing that “the Muslim extremists have gotten together with the socialists and communists” in a project akin to “community organizing at a global scale.”

Beck was unable to convince O’Reilly this time around, who insisted that “there is no evidence” for that global conspiracy and that, even if there were a plan, “there isn’t one situation in the world right now like that.”

The spirited debate from last night’s Factor via Fox News below: