Bill O’Reilly Responds To ‘Pinhead’ Critics By Asking ‘How’d The Moon Get There?’ 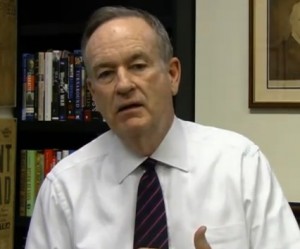 A few weeks ago, O’Reilly Factor host Bill O’Reilly was the subject of round derision for an exchange with American Atheists president David Silverman, in which O’Reilly used the clockwork regularity of the tides as evidence of the existence of God. O’Reilly critics took this to mean that he was unaware of the Moon’s involvement in the tiding process.

Recently, O’Reilly answered those critics, in a web-only video response to a question from an “O’Reilly Premium” member, by asking, “Where’d the Moon come from?”

Here’s O’Reilly’s response to the “pinheads” who criticized him:

At the time, I thought that O’Reilly was being unfairly maligned, since his argument didn’t rest simply on the existence of the tides, but on their clockwork regularity. That fact doesn’t make his argument any more compelling, but it does exonerate him of lunar ignorance. The logic O’Reilly employs goes something like this: when you wake up in the morning, and see your car in the driveway, you know someone built it. You don’t think it just appeared there by accident. The regularity of the tides demonstrate a similar machine-like quality. The difference is that your car has its maker stamped right on the front of it.

If it didn’t, you might fall to your knees and assume that God put the car there. Or, you might assume that the car’s existence was the result of many processes that are evident in its construction. Either assumption eventually leads to a point of origin that we simply can’t understand, and probably never will. It is at this juncture that the argument between deists and atheists becomes comical. As I’ve said before, believing that there is no God is about as useful as believing there is one.  Both sides insist that they know something that is currently unknowable.

O’Reilly’s response makes the decent point that much of our scientific understanding rests on articles of faith (history is rife with comically off-base scientific “certainty”), but he’s wrong to suggest that science and religion rely equally on faith. Science is the decoder ring to the impenetrable poetry of life as we know it, and its use is not mutually exclusive to a belief in God.

Albert Einstein seems to almost agree with O’Reilly. He described man’s relationship to God this way:

“I’m not an atheist and I don’t think I can call myself a pantheist. We are in the position of a little child entering a huge library filled with books in many languages. The child knows someone must have written those books. It does not know how. It does not understand the languages in which they are written. The child dimly suspects a mysterious order in the arrangements of the books, but doesn’t know what it is. That, it seems to me, is the attitude of even the most intelligent human being toward God.”

Great job, Einstein! Did you come up with that yourself?

I would ask O’Reilly (and Einstein), once the author of the books, or the maker of the moon, is revealed, who made that dude? Can God create a Factor segment that proves He is a pinhead?

This is not a mockery of religion, or faith, or science. Even solipsists have to get up every day and go to work. It is the smug certainty required to submit proof that God exists, or that He (or She) doesn’t, a quality evident in some deists, and all atheists. If you could prove the existence of God, he wouldn’t be God. If you could prove God didn’t exist, you would be God. Everything in between is, to some degree, a matter of faith.