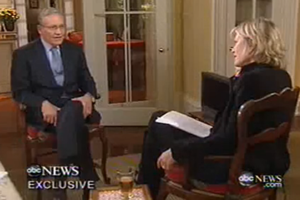 Promoting his new book, Obama’s War, author Bob Woodward sat down with ABC’s Diane Sawyer to expand on the stories in his book– namely those on the President’s frustration with the rigidity of the military in Iraq and Afghanistan and the internal struggles of the White House as the President did his best to push for an end to military expansion without defying the expertise of his generals.

Woodward relied on a series of internal sources for his anecdotes and background facts, telling Sawyer that, while many initially believed it impossible for Woodward to find openness on the part of staffers to talk about it, “by the end of the process,” he said skeptical staffers were “reading his own notes of the top-secret meetings.” And the conclusion he came to from their information is that the President “wants out” of both wars in Iraq and Afghanistan– “that is his bedrock conclusion.”

So why the delay in both regions? Woodward contends that there was both a feeling that, Obama being a young president, the military could keep his demand to go home at bay, while Obama himself strugged with, as Woodward puts it, “five blocks of granite: Hillary Clinton; Secretary of Defense Gates; Admiral Mullen, the chairman of the Joint Chiefs; Petraeus, who was then CENTCOM commander; and then General McChrystal.”

Woodward also goes on to talk about Gen. David Petraeus‘ suspected presidential aspirations, the on-the-ground strategies in the wars that Obama had to choose from, and his relationship with his staff and his military, in which Sawyer notes “you feel this constant erosion of his position.”