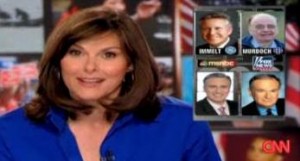 Mediaite has learned CNN has granted anchor Campbell Brown‘s request to be let out early from her contract.

She has agreed to stay on and anchor the 8pmET hour until a replacement is found. Updated with statements.

A source with knowledge of the situation tells Mediaite Brown made the request months ago – and before all the ‘how to fix CNN’ articles began rolling out. We hear she originally lobbied for the 7pmET opening, with the thinking the show would work better at an earlier hour (and without the Bill O’Reilly/Keith Olbermann competition). The plan was denied by CNN, she later asked for her release. (Separate rumors circulated around this time about what Brown’s status with CNN might be if her husband, Dan Senor, ran for Senate in New York – he didn’t.)

The question becomes – what would CNN put at 8pmET? One possibility is a return to a Crossfire-like program, a possibility thrown out in the last few months. And what would Brown do next? Well she has two young children, 2 and 1, both of whom were born since she came over to be a prime time host after her time at NBC. Hosting at 8pmET eliminated the possibility of being around at night.

A CNN spokesperson tells Mediaite: “A lot has been written and said about CNN lately. But we don’t comment on speculation.”

> Update: No official word yet from CNN, but we can confirm Brown is anchoring her program tonight.

> Statements: Here is Campbell Brown’s full statement, as well as CNN/U.S. President Jon Klein’s statement below. There is a lot in Brown’s statement, which we will dissect more tomorrow. For now, here they are:

I knew on the day that I accepted my job at CNN that a ratings victory at 8pm was going to be a formidable challenge. As I have been told over and over, this is the toughest timeslot in cable news. That is obviously due to the incredible talents of my 8pm competitors. I have also always marveled whenever a television anchor says that he or she pays no attention to ratings. I’m pretty sure the last time any anchor could honestly ignore ratings was well before I was born. Of course I pay attention to ratings. And simply put, the ratings for my program are not where I would like them to be. It is largely for this reason that I am stepping down as anchor of CNN’s “Campbell Brown”.

To be clear: this is my decision, and one that I have been thinking about for some time. As for why, I could have said, that I am stepping down to spend more time with my children (which I truly want to do). Or that I am leaving to pursue other opportunities (which I also truly want to do). But I have never had much tolerance for others’ spin, so I can’t imagine trying to stomach my own. The simple fact is that not enough people want to watch my program, and I owe it to myself and to CNN to get out of the way so that CNN can try something else.

CNN will have to figure out what that is. The 8pm hour in cable news world is currently driven by the indomitable Bill O’Reilly, Nancy Grace and Keith Olbermann. Shedding my own journalistic skin to try to inhabit the kind of persona that might co-exist in that line up is simply impossible for me. It is not who I am or who I want to be; nor is it who CNN asked me to be at any point. This is the right decision for me and I hope it will be a great opportunity for CNN.

Since its launch three decades ago CNN has strived to be an independent, credible and enduring source of news. While the rest of the cable news world moved to opinion, CNN allowed me to stay true to my hard-news roots and supported me with a true commitment to old-school journalism. There is plenty of debate now about whether real journalism even has a place in primetime. I may be taking myself out of that debate on a nightly basis, but I am truly proud of the work we have done on this program and I do still believe that journalism has an essential place in primetime and at all times. I am also especially proud of the people who put this show on the air every night. They are an amazing, dedicated, loyal and caring team. To them, I will be forever grateful.

My plan right now is to help CNN through any transition, and then to enjoy, for the very first time, the nightly ritual of “Good Night Moon” and good night kisses with my two little boys. I wish my CNN colleagues all the best. And as long as bedtime doesn’t conflict with primetime, I will be watching and pulling for them.

“Today is about Campbell. We want to wish her well as she begins the next phase of her life. We respect her decision to leave. We will announce our programming plans in the coming weeks.”