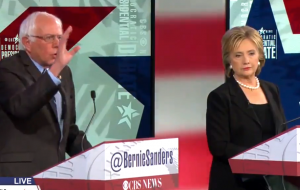 The second Democratic debate of this campaign season is now in the books. Overall, a compelling evening that relatively few watched live thanks to the DNC decision to schedule it (and the next two moving forward) on a weekend night when people aren’t in front of their TVs or watching football, a movie––anything but political theater.

No matter… CBS emerged as the gold medalist for reasons one wouldn’t expect going in. First off, the decision to include the network’s congressional correspondent Nancy Cordes, Des Moines Register senior political columnist Kathie Obradovich, and CBS affiliate anchor (WCCI) Kevin Cooney to the moderating team added a fine dimension to the evening from a hard journalism perspective. Most other outlets––particularly those of the cable news variety––understandably use the event and the huge audiences that go with them to promote its own talent on a big stage. CBS went a different route, and the unknown aspect of the faces on the screen was refreshing. More importantly, their questions were pointed, well-researched and without editorial.

Example: Obradovich to Sanders on the minimum wage:

OBRADOVICH: You called for raising the minimum wage to $15 an hour everywhere in the country. But the President’s former chair of the Council of Economic Advisers, Alan Krueger, has said a national increase of $15 could lead to undesirable and unintended consequences of job loss. What level of job loss would you consider unacceptable?

Sanders couldn’t provide the specifics asked for (acceptable job losses in return for better wages). Obradovich pressed twice about consequences around raising the minimum wage to $15 but still couldn’t get a number. The effort was there and was clear to anyone watching Sanders wasn’t going to go there. Conclusions can be drawn from there without the moderator making it about herself.

CBS also used social media perfectly throughout the night. Why? Because the questions chosen were in real time. Pet peeve: the planned Facebook video questions seen in past debates are simply annoying… rehearsed, oftentimes generic, a gimmick to keep a sponsor happy. That wasn’t the case last night, as the CBS team (led by CBS Evening News executive producer and CBS News executive editor Steve Capus) used Twitter flawlessly because they took questions to an answer a candidate may have given in real time. Best example of this approach came after Hillary’s worst moment of the night (and worst moment of her campaign in months) while shamelessly invoking 9/11 to defend her record of being heavily tied to Wall Street:

SANDERS: Why, over her political career, has Wall Street been a major, the major, campaign contributor to Hillary Clinton?

Which drew these responses from the political spectrum far and wide:

Wait, Hillary Clinton’s answer is Wall Street supports me because 9/11?

Hillary Clinton mentioning 9/11 in the context of defending the banks is a cheap political trick. That’s a Republican move. #DemDebate

Folks, Hillary’s earlier answer on Wall Street donations — linking them to 9/11 — was cray-cray… and will haunt

Thrush couldn’t be any more correct. And if you’re watching the Sunday political shows this morning, you’ll see he’s right.

CLINTON (later): You know, not only do I have hundreds of thousands of donors, most of them small. And I’m very proud that for the first time a majority of my donors are women, 60 percent.

You have to hand it to Hillary: She didn’t just play the 9/11 card, but the gender card in the same answer. And like trained seals, the stacked audience somehow applauded that answer.

But here’s the main point: CBS was masterful in providing real-time reaction from those watching at home after the biggest moment of the debate, as producers plucked one tweet that stated they’d never witnessed a candidate “invoke 9/11 to champion Wall Street. What does that have to do with taking big donations?” Hillary was then forced to provide an answer again (not much better than the first). A big moment just got bigger, and without the moderators having to inject themselves back in.
Know this: those across the industry will employ this approach for all debates moving forward, and obviously rightly so.

Which brings us to moderator John Dickerson, who was smooth, comfortable, periodically witty and mostly asked solid questions. Note: It still makes zero sense that he felt compelled to meet with each campaign team before the debate, per my Saturday preview column. The optics are just horrible when doing so. There is no primary precedent for doing so by Fox, CNN or CNBC in debates prior. In this information age, all the research needed for conducting “good journalism” (CBS’s response to critics upon news via Politico of the meeting went public) can be found anywhere. The records of the candidates are very public and a veteran like Dickerson shouldn’t need input from campaign managers to fill in any blanks.

All of that said, Dickerson gave mostly a quality performance and displayed gravitas in the process. But here was the big swing-and-miss of the night after Bernie sang the “nobody cares about your damn emails” song again per the official transcript:

For Democrats, there’s an FBI investigation going on. Can you satisfy Democrats, who might worry about an another shoe dropping, that you and your staff have been totally truthful to them, and that another shoe is not going to drop?

CLINTON (later adding): But the differences among us pale compared to what’s happening on the Republican side. And if you listen to what they say — and I had a chance over those 11 hours to watch and listen, as well as what I see in their debates — they are putting forth alarming plans.

I mean, all of us support funding Planned Parenthood. All of us believe climate change is real. All of us want equal pay for equal work.

They don’t believe in any of that. So let’s focus on what this election is really going to be about.

Note: There are times to follow up and times to let the answer (or non-answer) speak for itself. That said, Dickerson absolutely had to follow here, because Mrs. Clinton just completely (and intentionally) conflated her recent Benghazi testimony with an FBI investigation about her secret home-based private email server to conduct government business while Secretary of State.

So… those 11 hours Mrs. Clinton referred to twice in her answer had almost nothing to do with the FBI investigation Dickerson broached. That’s obviously not what that Benghazi testimony was about (outside of the email that proved she initially lied about the cause of the attacks). But the moderator just let the answer stand without challenging. And considering this the candidate’s biggest weakness and could seriously damage or outright end her campaign if indicted, the record needed to be corrected here but wasn’t… dropping Dickerson’s overall grade from A to B.

As for the candidates, I had it at (1) Sanders (his awkward turn at the outset from a quick answer on defeating ISIS to income inequality notwithstanding), (2) O’Malley (who actually showed up to challenge the frontrunner this time, but like Rand Paul‘s standout performance on Wednesday, it won’t do anything to save him), and (3) Clinton (debates often come down to one moment, and the Wall Street-9/11 answer will be seen in ads until election day).

But from a media perspective, the night belonged to CBS and particularly its production team.

Great decision on the peripheral moderators from local outlets.

An even better decision on the right way to use social media.

And the face of the telecast was very good outside of one missed opportunity.

Overall grade: A-minus. It’s just a shame so few got to see it live.