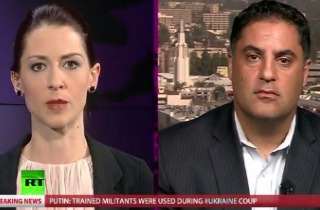 The Young Turks host Cenk Uygur appeared on RT recently with anchor Abby Martin where he was asked about the ongoing controversy surrounding the network’s coverage of Russia’s invasion of Crimea and press freedom in the United States. Uygur said that the distinction between the two countries was evident in the fact that he lost his job on MSNBC for criticizing President Barack Obama while Martin retained her job after criticizing Russian President Vladimir Putin.

Uygur told Martin that he lost his MSNBC show because the White House was not “happy” with his criticism of Obama from the left.

Martin added that CNN is moving to “reality TV” and entertainment journalism. “I think a lot of people on TV are good people and they don’t even quite realize that they’re part of this machine,” Uygur said. “But, what happened was, they got promoted because they toe the line.”

Both Martin and Uygur criticized CNN further for what they said was their “soap opera” coverage of the missing Malaysian passenger plane.

“It seems like this network is constantly in the crosshairs of the U.S. media,” Martin later opined. She asked if Uygur was surprised by that. Uygur replied by saying an “honest” discussion about the funding of cable news networks would also include criticism for networks like CNN and Al Jazeera.

“CNN has lost so much credibility all across the world because everybody knows they cater to the government,” Uygur said. “You criticized the Russian actions in Crimea, you’re still on RT. I criticized the Obama administration and the U.S. government on MSNBC, I’m no longer on MSNBC.”

“So, who has the freer media?” he concluded.