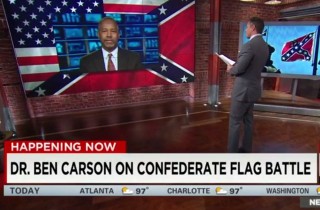 The moment came towards the end of an interview in which Carson and Cuomo had discussed ongoing controversy over public display of the Confederate flag.

Carson spoke of the need for firm leadership following last week’s racially-motivated slaying of nine parishioners at a historically black church in Charleston, S.C., which prompted Cuomo to ask him the following:

Let me hold you to your own test on a different level. Many people are equating what the Confederate flag stands for with the Gay Pride flag, and saying, ‘Hey, that flag should be taken down, too, because all it stands for is hatred toward Christians and people who don’t favor gay rights. Do you see an equation between those two symbols?

(Note: By “many people,” Cuomo was mostly referring to a certain perpetually-outraged Breitbart.com columnist who calls the rainbow flag a “fascist” symbol because words don’t mean anything anymore.)

Carson paused in his response, clearly unhappy with the pivot: “I decided that I really wanted to talk about the Confederate flag during this time.”

And Cuomo pressed further: “But you just said, doctor, that you cannot avoid these difficult situations because that’s how they fester. You must deal with what is difficult to deal with, that’s part of leadership.”

But Carson held firm: “Like I said: If you want to talk about that, let’s do that on a different segment.”

This isn’t the first time the pair have shared uncomfortable discussions about gay rights: Carson made headlines earlier this year when he suggested to Cuomo that prison sex proves that homosexuality is a “choice,” leading to a controversy so strong that the doctor swore off any and all LGBT-related questions. Until the next time he appeared on New Day and discussed homosexuality.