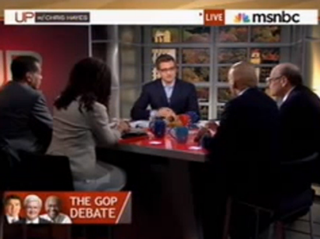 On this morning’s Up with Chris Hayes, the panel discussed last night’s Family Leader Republican debate and, of course, the line of the night– Newt Gingrich telling the Occupy Wall Street protesters to “take a bath.” It’s a line, noted Chris Hayes, that in 2011 felt somewhat anachronistic yet received the most applause of the night, and with that the panel debated the effects of a new phenomenon on the right heralded in by Occupy Wall Street: the return of “dirty hippie” as an effective rhetorical instrument against the left.

Hayes started things off by noting that Gingrich had effectively delivered this line, and it was one that seemed to have been missing from the Republican talking point toolbox for a long time. For panelist Bob Herbert, it was a bad sign for the GOP, given “a collection of candidates so poor” as had not been seen in a long time. He also called Gingrich’s comments specifically “meanspirited and inappropriate at a moment when we have a lot of problems and we need to pull together.”

Congressman Steve Cohen agreed, adding that “Wall Street is the enemy” and that Gingrich arguing that the Occupy Wall Streeters didn’t pay for the parks in which they were living was incorrect– “taxpayers pay for the parks.” With that in mind, Hayes switched gears to the greater issue of the jobs crisis and how Republicans would be able to explain the high number of unemployed people without getting rid of the message that they were “lazy.” “There’s something structural going on,” he argued,” to which Reihan Salam replied that the answer was partially cultural: “if you’re someone who is living in New York City, who’s working in new media, you’re inclined to think about those folks differently,” he explained, because of the “different cultural context,” and “empathy is something we all tend to fail at.”

Melissa Harris Perry noted that it was not just culture, but worldview that distinguished them. “If the world is fundamentally fair and just, then you lack of success, your failure must be your fault,” she noted, and part of that was a staunch faith in God.