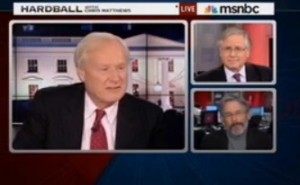 On Monday night’s edition of Hardball, host Chris Matthews compared someone or something with Adolph Hitler, although the live-wire host confused matters somewhat with a disclaimer. As Huffington Post editorial director Howard Fineman described the odd way in which Republicans like Mitt Romney and Paul Ryan blamed the minority vote for their defeat in the presidential election, Matthews interjected that, while what he was about to say had “no bearing” on the Republican party, “the last guy to refer to the ‘black auxiliary was Hitler.”

Earlier in the segment, Matthews first articulated the crux of his closing remarks about the Republicans being a party of “white men of property,” and noted that the founding fathers “weren’t thinking of Sally Hemings’ vote, I’m sure of that.”

Howard Fineman then added that “when you listen to the explanations that the Republicans and conservatives give for why they lost, they always say, ‘Well, the black community and the Hispanic community voted overwhelmingly for the President, as if those votes don’t count as much as everybody else’s vote, and if that’s some kind of explanation, some kind of explanation for the weird phenomenon of the fact that the Republicans didn’t win. There was this extraterrestrial force out there of African-Americans and Hispanics. Well, duh, that’s the country.”

Fineman isn’t talking about some fringe lunatic like Ted Nugent or Donald Trump (or not just about them), but about the Republican Party’s entire presidential ticket. In one of his first post-election-beatdown interviews, vice-presidential nominee Paul Ryan explicitly blamed his ticket’s loss on “urban” voter turnout, and separated that obviously magical phenomenon from any possible policy implications. The Republican loss, and President Obama’s victory, were unearned, were products of demographic caprice.

The very next day, Republican presidential nominee Mitt Romney echoed Ryan’s remarks, adding that this wave was conjured through the use of unearned “gifts” from President Obama.

Matthews tried to sum up the attitude with a comparison that he knew would draw ire. “The last person to try that, I hate to say,” Matthews said, adding “this has no bearing on the Republican Party, and these references are always dangerous, but I’ll take it anyway, the last guy to refer to the ‘black auxiliary was Hitler…During the ’36 Olympics, we had Jesse Owens and a couple other guys winning the Olympics, and they were saying ‘Well, they had their auxiliary out there.'”

It’s an imperfect comparison, in that the “black auxiliary” remarks were made before Jesse Owens and the 22 other black American Olympic athletes beat Hitler’s ball off, but the sense of shock in the face of defeat, and the utter denial that it was a challenge to their superiority, resonates.

As much fun as it is to beat up on Hitler, though, it’s important to remember what sort of welcome Jesse Owens came home to:

Upon Owens’ return to New York and a ticker-tape parade, he had to ride the freight elevator to a reception in his honor at the Waldorf-Astoria. He was treated as a kind of curiosity. When endorsements didn’t come his way, he made money by, among other activities, running against horses and dogs.

“People said it was degrading for an Olympic champion to run against a horse, but what was I supposed to do?” Owens said. “I had four gold medals, but you can’t eat four gold medals.”

By the same token, Matthews’ critique could also apply to the mainstream Beltway types who declared that the President’s white-deficient victory did not constitute a “broad mandate.” As Fineman so eloquently put it, “Well, duh, that’s the country.”