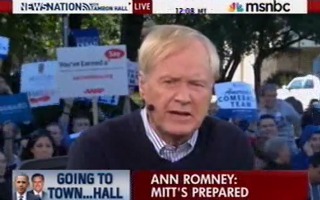 MSNBC host Chris Matthews went off on the independent and undecided voter in a pre-debate appearance with MSNBC anchor Tamron Hall on Tuesday. After saying what he felt President Barack Obama should say in his upcoming debate against Mitt Romney which could secure his position with voters in swing states like Ohio, Matthews went off on undecided voters calling them “boneheads.” He concluded by saying that if these people were still confused about the choice in this election, they should just not vote at all.

Hall asked Matthews for his opinion on polls that show Romney gaining slightly on President Obama in the crucial battleground state of Ohio. Matthews offered his insight on how the president should move to secure that lead in tonight’s debate, but quickly pivoted to revealing his thoughts about voters who may still be undecided.

“People say, ‘this election’s hard for me to decide.’ You’d have to be a bonehead not to be able to decide between these two guys,” said Matthews to the cheers of the crowd flanking him. “It is so easy.”

“This is not complicated,” Matthews continued. “People are still scratching their heads trying to decide what’s – well, gee, just don’t vote. Don’t bother if you have to think at this point. What’s your problem?”