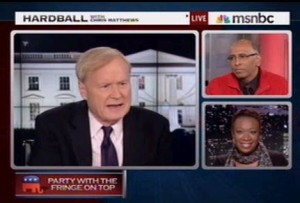 The nature of cable news is such that a certain number of fallacious talking points are ignored, like insect parts in peanut butter, simply in the interest of time. Every now and then, though, one gets stuck in the filter, and cleared out by a fed-up host. That’s what happened on Friday night’s Hardball, when MSNBC contributor and former RNC Chairman Michael Steele casually remarked that the Republicans are a “center right party, very much like the country,” and host Chris Matthews spent most of the segment pushing back against that common, and false, notion, repeatedly reminding Chairman Steele that “Obama won.”

The segment was pegged to Sen. Jim DeMint’s (R-SC) departure from the senate for the greener, red-meatier pastures of The Heritage Foundation, but was sidetracked when Matthews asked Chairman Steele how he would “umpire” the conflict between more establishment Republicans, and Tea Party ideologues like Sen. DeMint.

“I would remind them we’re a center right party, very much like the country,” Steele replied.

“I don’t agree with that,” Matthews declared, abruptly.

“They just voted for Obama.

“That’s another show,” Steele answered smoothly, trying tp pivot. “We’ll have that conversation. But the country is center-right in large measure.”

“We can’t have another arithmetic system!” Matthews exclaimed, referencing the presidential election results.

Seeing he wasn’t getting around Mathews, Chairman Steele said “51% of the people identify themselves as pro-life. That’s center right,” then tried to punt again, adding “That’s another show.”

“They self-identify as pro-life,” Steele repeated, and went for the exit again. “Let’s move on. The point is…”

“No,” Matthews said, “I can’t move on,”when it comes down to the law the people are pro-choice, when it comes to values they may be against abortion,” and asked “You have just said the country is a center right country, and your evidence of that is that Obama won?”

“No, that’s your evidence,” Chairman Steele shot back.

“Taxing the rich? They’re against that,” Matthews cut in.

“There are individuals out there that they can appeal to,” Steele replied, “and my point is, more broadly speaking, that you cannot lump this – what DeMint is doing, and say that all this gaggle of conservatives are going to be following behind it.”

Things settled down from there, until the end of the segment, when Chairman Steele circled back, saying “We can disagree or agree on whether the country is center right or center left, but the fact of the matter is we need to be wherever the country is, that sweet spot, to have that conversation.”

“Can I give you some advice?” Matthews asked. “Run Christie.”

The notion that the country is “center-right” gets repeated all the time, and not just by conservatives, and it’s that kind of thinking that got Mitt Romney* in trouble, and if Romney’s defeat by a demographic coalition that only figures to get larger doesn’t convince you, then a quick look at recent polls ought to. When it comes to taxing the rich and “reforming” Medicare, for example, even Republicans are no longer “center-right.”