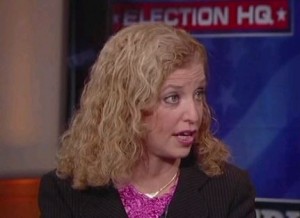 If you have a talking point handy to wave around every time you duke it out with your opponents, you better be prepared in case they try to use the same point on you. But apparently that didn’t happen on Fox News Sunday today when Chris Wallace kept pressing Debbie Wasserman-Schultz to be consistent in her charge that Mitt Romney was directly responsible for laying people off at companies owned by Bain Capital. If that was the case, Wallace asked, why isn’t President Obama responsible for the job losses at Solyndra?

Wallace was referencing the energy company that filed for bankruptcy last year despite getting an investment of over half a billion dollars from the federal government. Wasserman-Schultz was alleging that Romney, despite not being the CEO of any of the individual companies that went under, was responsible for job losses because of the investment choices he made. And yet, she did not seem to make the connection between the two points, continuing to insist that Obama is not the CEO of Solyndra, therefore Wallace’s argument is invalid.

Calling this a debate or a discussion would be giving it too much credit, it reads more like an old Abbott and Costello routine. “Who’s on Bain?” “Exactly.” “What do you mean?” “No, he’s on Solyndra.” “Who is?” “No, who is on Bain!” “What are you asking me for?!”

And even if Wasserman-Schultz did have an important distinction to share between Romney’s leadership of Bain and Obama’s involvement with Solyndra, she never got it across. You could say that it was because Wallace cut her off, but it’s more likely that she was just caught by surprise (or didn’t have a good answer) by this line of questioning, and couldn’t give a satisfactory explanation.

Note: This post has been edited since it’s original posting – Jon Nicosia