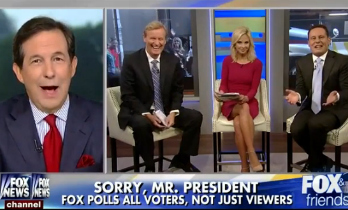 That was what Fox News Sunday host Chris Wallace told his colleagues at the Fox & Friends couch while prodding them to stop whining about the president’s recent criticism of the cable network.

During his Thursday afternoon speech on the economy, President Barack Obama jabbed at the popular cable news network by suggesting they had turned the Affordable Care Act into a “fanged threat” to freedom. Several Fox hosts fired back, including Greta Van Susteren — who called the president “childish” — and the co-hosts of The Five.

When it came Fox & Friends‘ turn, however, Wallace implored the triad of hosts to grow thicker skin and stop obsessing over the president’s comments:

Listen, I don’t know why anybody would be upset about that. It’s kind of a badge of honor. First of all, I think it’s fair game. We’re big boys. We have been very critical of the president and Obamacare and I think rightly so. It’s not like we think there is anything wrong with our reporting. The president is trying to gin up his base, about a month before the election, he calls us out. We should view it as a badge of honor.

“We’re big boys and girls,” Wallace later reiterated. “We can take it.”

But the Friends were not having it.

“I just didn’t think we belonged in the dialogue,” Brian Kilmeade said. “Just tell me what you think and take on the other party.”

“Are we at the presidential level?” Steve Doocy asked. “Isn’t he punching down?”