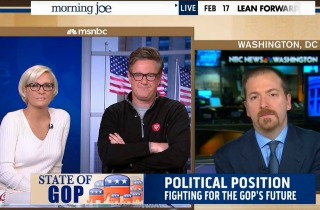 MSNBC host Joe Scarborough remarked on Monday that the Republican Party looks more strategically focused than their Democratic rivals are giving them credit for. NBC News’ White House correspondent and MSNBC host Chuck Todd agreed and said that ideological and strategic recalibration is what parties that are out of power do. He added that the tensions within the Democratic Party would be “explosive” if not for former Sec. Hillary Clinton and President Barack Obama.

Scarborough began by saying Vice President Joe Biden’s remarks at a Democratic retreat on Friday were the equivalent of a hollow affirmation hung up in a locker room. “There is no Republican Party,” he said, “this kind of sounds like what people were saying about the Republican Party in 1979.”

RELATED: Biden: ‘I Wish There Was a Republican Party,’ But ‘There Isn’t’

“If we’re going to talk about the Republican Party, I like what I’m seeing,” Scarborough told Todd. “Seems like we’re in a much better place than we were six months ago leading up to the shutdown.”

“I’m trying to figure out when a political party out of power didn’t look like they were trying to sort themselves out,” Todd agreed. “This is what parties out of power do when they don’t have the White House.”

“You don’t think if the Democrats lost the White House tomorrow that everything that Hillary and Obama, frankly, are papering over in the Democratic Party wouldn’t pop up immediately?” he continued.

Todd said that contentious issues like trade would fracture the Democrats if the party wasn’t united by a sitting president.