On Saturday, CNN’s Sara Sidner reported on the sad story of a four-year-old Palestinian boy reportedly killed by an Israeli airstrike on Gaza. The boy had become a martyr of sorts, with the Egyptian prime minister Hisham Kandil and Hamas prime minister Ismail Haniyeh showing the corpse to the press and taking the opportunity to condemn Israel’s military strikes.

However, whether or not the child was actually killed by Israel has become a subject of controversy: it seems as though CNN may have been duped by a false story in which four-year-old Mahmoud Sadallah was killed by a rocket, but an errant Palestinian one — not an Israeli one.

In her report, Sidner said that the “small child became a symbol of civilian casualties” of Israel’s strikes, “a child of Gaza, another victim of an airstrike.” She noted that within five hours of the child’s death, “we saw no evidence here of military activity,” suggesting that the child was a victim of a sloppy bombing on Israel’s part.

But many have expressed skepticism that the rocket that killed the boy came from the Israeli Defense Force. Pro-Israel blogger Elder of Ziyon wrote:

…Hamas and other terror groups were firing rockets throughout Friday morning while the IDF did not, plus the fact that over 100 rockets have fallen short in Gaza (both using past performance and IDF statistics as proof), and the fact that the shrapnel in the video matches almost exactly the shrapnel damage we have seen from rocket fire into Israel, and it is very clear: this child was killed by Gaza rocket fire, not by Israel.

Conservative sites like Breitbart, NewsBusters, and HonestReporting all picked up on the possibility of CNN being duped by a “martyred” child, accusing CNN of giving a “PR gift for Hamas, [who are] eager to portray the IDF as vicious child killers.”

But there is a healthy dose of skepticism over Sadallah’s killer even in more mainstream press outlets, as the pro-Israel bloggers pointed out.

The Associated Press posted this image with a subtly skeptical caption: 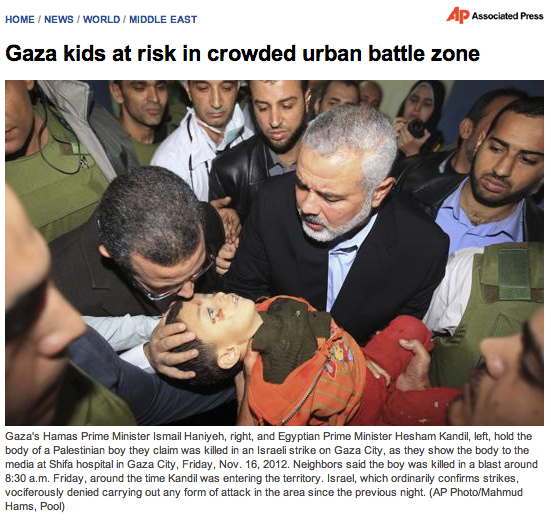 The Egyptian and Hamas prime ministers “claim” the boy was killed by Israeli rockets, the AP reported, noting that Israel’s prime minister “vociferously denied carrying any form of an attack in the area since the previous night.” The AP report also noted that “no one appeared to have witnessed the strike” and “the area showed signs that a projectile might have exploded there, with shrapnel marks in the walls of surrounding homes and a shattered kitchen window.”

Those complications to the story were extended in the Sunday Telegraph‘s reporting (emphasis added):

The child’s death on Friday figured prominently in media coverage after Hisham Kandil, the Egyptian prime minister, was filmed lifting his dead body out of an ambulance. “The boy, the martyr, whose blood is still on my hands and clothes, is something that we cannot keep silent about,” he said, before promising to defend the Palestinian people.

But experts from the Palestinian Centre for Human Rights who visited the site on Saturday said they believed that the explosion was caused by a Palestinian rocket.

Indeed, the PCHR, which keeps track of casualties within Palestine, did not list Sadallah as a victim of an Israeli military attack.

Adding more fuel to the flames of skepticism was the New York Times report on the child’s death:

It is unclear who was responsible for the strike on Annazla: the damage was nowhere near severe enough to have come from an Israeli F-16, raising the possibility that an errant missile fired by Palestinian militants was responsible for the deaths. What seems clear is that expectations for a pause in the fighting, for at least one family, were tragically misplaced.

Naturally, the conservative sites have called upon CNN to issue a correction or retraction — neither of which has yet to come.

In a battle that seemingly has no end in sight, and plays out mostly in heavily crowded urban spaces like Gaza City, we are likely to see more of these complicated controversies arise.

Watch the original CNN report below:

UPDATE: CNN sends the following segment from Don Lemon‘s weekend show in which Lemon reintroduced the story, but noted the strong possibility that the killer missile was an errant Palestinian rocket. “CNN’s crew in Gaza said it saw two such rockets passing overhead fired apparently not far from where the boy lived,” Lemon noted before interviewing Sidner, who made no mention of her original report.