Viewers of CNN’s famously staid newsman Wolf Blitzer were treated to an utterly irresponsible chyron on last night’s episode of the Situation Room, declaring President Donald Trump’s claim that he is tougher on Russia than predecessor Barack Obama “false.” 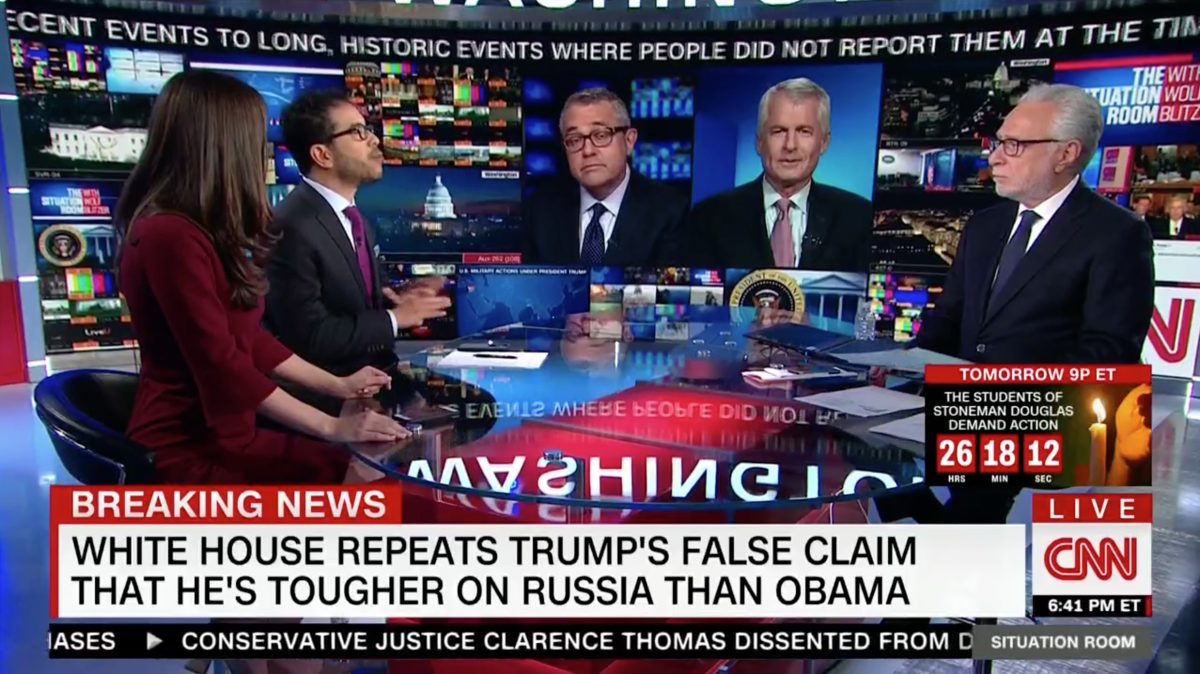 It ran during a discussion of the Trump administration’s actions to oppose the Kremlin, after the president tweeted that he has been “much tougher on Russia than Obama”:

I have been much tougher on Russia than Obama, just look at the facts. Total Fake News!

After the tweet — which was accompanied by several others trashing Obama’s track record on Russia — White House press secretary Sarah Huckabee Sanders was pressed by reporters to provide examples of Trump standing up to the Kremlin. Let’s just say she struggled.

In CNN’s segment, Blitzer spoke with White House reporter Kaitlin Collins, who debated the merits of Trump’s very subjective claim that he has been tougher on Russia than Obama, with the panel concluding that 45 hasn’t out-flexed 44 in standing up to Vlad.

Hard to disagree there. What’s confounding is the chyron that accompanied the segment, however, and that it took a very subjective claim made by Trump and bizarrely deemed it “false.”

What’s more, while Blitzer’s panelists made strong arguments that Trump has not been tougher on Russia than his predecessor — and Huckabee Sanders is as usual useless in her defenses of Trump’s claim — the debate is far from settled.

John Noonan, a national security analyst and defense adviser to Sen. Tom Cotton (who is certainly no dove when it comes to Russia) decried CNN for the chyron.

“You can get experts to debate the merits of each admin’s policies, that’s perfectly fine,” Noonan tweeted. “But this isn’t just putting your finger on the scale — it’s sitting on it.”

CNN respectfullly, please tell your producer not to do this. You can’t anniont yourself arbiter of these debates

You can get experts to debate the merits of each admin’s policies, that’s perfectly fine. But this isn’t just putting your finger on the scale — it’s sitting on it.

I agree when you say a free and fair press is important. Pls remember the latter

CNN has been playing it fast and loose with their snarky Trump chyrons for some time. But a little sobriety is in order here. Fact-checking the president’s subjective claims does not serve viewers — it only serves to fuel allegations of anti-Trump bias.

Watch the segment above, via CNN.