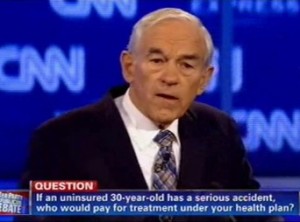 Apparently, the supposed “pro-life” party is also rabidly pro-death. In one of several recent ugly audience reactions at Republican debates, several in the crowd at last night’s CNN/Tea Party Express debate hooted their approval at moderator Wolf Blitzer‘s followup question about leaving a hypothetical coma patient to die if he couldn’t pay for care. Rep. Ron Paul said that the uninsured should “take (their) own risks,” and Blitzer rejoined, “are you saying that society should just let him die?”

Paul answered “no,” but several in the crowd hooted “Yeah!” to a smattering of laughter:

BLITZER:  Thank you, Governor. Before I get to Michele Bachmann, I want to just — you’re a physician, Ron Paul, so you’re a doctor.  You know something about this subject.  Let me ask you this hypothetical question.

A healthy 30-year-old young man has a good job, makes a good living, but decides, you know what?  I’m not going to spend $200 or $300 a month for health insurance because I’m healthy, I don’t need it.  But something terrible happens, all of a sudden he needs it.

Who’s going to pay if he goes into a coma, for example?  Who pays for that?

PAUL:  Well, in a society that you accept welfarism and socialism, he expects the government to take care of him.

BLITZER:  Well, what do you want?

PAUL:  But what he should do is whatever he wants to do, and assume responsibility for himself.  My advice to him would have a major medical

PAUL:  That’s what freedom is all about, taking your own risks. This whole idea that you have to prepare and take care of everybody –

BLITZER:  But Congressman, are you saying that society should just let him die?

PAUL:  No.  I practiced medicine before we had Medicaid, in the early 1960s, when I got out of medical school.  I practiced at Santa Rosa Hospital in San Antonio , and the churches took care of them.  We never turned anybody away from the hospitals.

PAUL:  And we’ve given up on this whole concept that we might take care of ourselves and assume responsibility for ourselves.  Our neighbors, our friends, our churches would do it.  This whole idea, that’s the reason the cost is so high.

The cost is so high because they dump it on the government, it becomes a bureaucracy.  It becomes special interests.  It kowtows to the insurance companies and the drug companies, and then on top of that, you have the inflation.  The inflation devalues the dollar, we have lack of competition.

There’s no competition in medicine.  Everybody is protected by licensing.  And we should actually legalize alternative health care, allow people to practice what they want.

Jon Seidl at The Blaze tries to get the Tea Party audience some room to wiggle out of this ghoulish display, theorizing, alternately, that it was a delayed reaction to something Paul said earlier (not unless those folks were watching on their portable DVRs), or that the hoots were from liberals, cheering on Blitzer’s “Gotcha!” (which would make them the quietest bunch of liberals in the world for the rest of the debate)

The reactions of three or four audience members at a debate isn’t all that meaningful on its own, but this outburst follows last week’s Death Penalty Ovation at the Reagan Library debate, and another ugly moment at the Tea Party debate in which the crowd cheered for fed chairman Ben Bernanke to be tried for treason, a capital crime.

While Rep. Paul mercifully declined to leave coma-guy to die, he is simply suggesting a form of socialized medicine, only without the guarantee. He places moral responsibility for coma guy on “our neighbors, our friends, our churches,” which only differs from socialized medicine in that it burdens churches (who don’t pay taxes). That, and my neighbor has a lousy TV in his ICU.

This bloodthirsty vibe that’s running through these debates will undoubtedly help Rick Perry, whose popularity has been undiminished (perhaps even enhanced) by his Death Dealing ways in Texas, but will this sort of thing still knock ’em dead when the audience is the entire American electorate? Times are tough, so who knows. America is also in an ugly mood.