Colbert Grills The Hell Out Of Spitzer: ‘This Ain’t Charlie Rose, Motherf*cker!’
VIDEO

Colbert Grills The Hell Out Of Spitzer: ‘This Ain’t Charlie Rose, Motherf*cker!’ 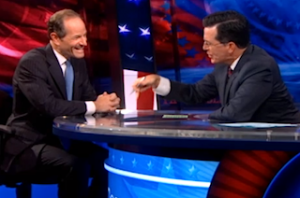 Stephen Colbert welcomed a surprise guest to his set Thursday night during a segment on “Political Sex Scandals & New York City Elections”: the one and only Eliot Spitzer, who recently announced his return to politics with a run for NYC comptroller. Colbert grilled the former New York governor and prostitution client even harder than CNN’s Jake Tapper did earlier in the day yesterday, at one point asking him if perhaps the city comptroller should have a “modicum of self-comptrol.”

Throughout their conversation about larger issues like reigning in Wall Street and handling the city’s pension funds, Colbert worked in plenty of other zingers at Spitzer’s expense. “Why do you want this job?” he asked Spitzer. “Because, before you had your fall from grace, or whatever her name was… You were the governor of the state! Aren’t you at one and the same time above and below this job?”

Later in the interview, Colbert mentioned figures like South Carolina’s new congressman Mark Sanford and New York mayoral candidate Anthony Weiner, who had their own sex scandals and now appear to be in the good graces of voters. “It seem that voters are more forgiving than they used to be,” Colbert concluded. “Do you think that signals progress for our country or the slow decay of our moral values?”

When Spitzer could only answer with, “Wow, that’s a tough one,” Colbert shot back, “This ain’t Charlie Rose, motherfucker!”

Watch video below, via Colbert Report: