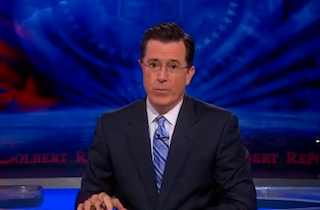 And as soon as it began, it ended: after a tweet from The Colbert Report’s account outraged the Asian-American community and sparked a #CancelColbert campaign, both Stephen Colbert and his employers at Comedy Central apologized, with the latter taking responsibility for accidentally taking a Colbert bit out of context.

To recap: The official @ColbertReport twitter feed pulled a quote from a segment in Colbert’s March 26th episode, where he lambasted the Washington Redskin’s attempt to make nice with the Native American community for that awkward name and brought up the controversy surrounding Colbert’s character’s character, “Ching Chong Ding Dong.” Great point. But a terrible, terrible choice in pull quote:

Whoever runs Stephen Colbert’s Twitter account — which, by the way, is not Stephen Colbert — apologized for the tweet, and explained the meaning behind that Colbert quote:

For the record @ColbertReport is not controlled by Stephen Colbert or his show. He is @StephenAtHome Sorry for the confusion #CancelColbert

This is a Comedy Central account, with no oversight from Stephen/show. Here is quoted line in context http://t.co/UFnaFfOSpn #cancelcolbert

Stephen Colbert, for his part, tweets his own official thoughts at @StephenAtHome and was put in the strange position of being outraged at…himself:

#CancelColbert – I agree! Just saw @ColbertReport tweet. I share your rage.
Who is that, though? I'm @StephenAtHome
http://t.co/e0Pqz7U7i9

To note: “Ching Chong Ding Dong” has been a Colbert Report staple since the show’s launch in 2005, and is a fairly meta bit wherein Stephen Colbert’s pundit character pretends to be anothercharacter (a bucktoothed Chinaman stereotype), and sees nothing wrong with it because “there’s a difference between me and a character I’m doing.”

Like we said, it’s pretty meta. Here it is below (and let it be known that I remember this because I, an Asian person who was not offended by Colbert’s tweet, have been a fan of The Colbert Report since its inception):

Here’s the relevant part of the segment in question: