Concha: What We Learned After 11 Days of Analyzing Martin Bashir & MSNBC 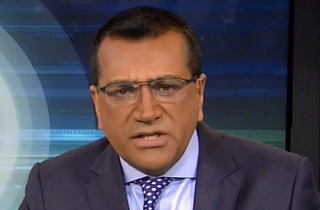 “So is this thing over?” a non-political friend of mine asked me Sunday in regards to the Martin Bashir/Sarah Palin story.

It took me a few seconds to figure out how to answer the question. But in bold terms that left no room for ambiguity, the response eventually was this:

It’s now been 11 days since Mr. Bashir used a national television platform on a cable news network to suggest someone defecate and urinate into a former vice presidential candidate’s mouth. The end–which apparently sorta came when Palin accepted the host’s apology–appears to have arrived. Really, outside of Tom Brokaw or Brian Williams saying something, where else is there to go if no suspension or worse is coming?

To that end, let’s review the whole saga for those keeping score at home:

– Bashir made the aforementioned comments on Friday, November 15th
– These comments were scripted and therefore vetted and approved by at least four different staff members of Bashir’s show (likely a copy editor, segment producer, line producer and a senior or executive producer)
– Bashir apologized on his program on Monday, November 18th
– However, the day after said apology, MSNBC morning show co-host Joe Scarborough stated (on another network) that he didn’t think Bashir wrote the apology by himself
– As of this writing (Tuesday morning) MSNBC’s Twitter feed still has not deleted a Tweet to the network’s 530,000+ followers promoting Bashir’s original comments
– After nine days, MSNBC management finally released a statement (November 24th) indicating it is “handling the matter internally”
– Externally, Bashir has not been suspended or fired, nor does it appear he will be reprimanded in any capacity
– This past Sunday (11/24), Palin stated on Fox News Sunday that she has accepted Bashir’s apology

And that last part appears to mark the end of the road. Know this: MSNBC isn’t going to suddenly gain a conscience or establish anything resembling standards for on-air conduct ten days after allowing the Bashir comments to go out over its air. Invariably in these situations, action is taken within hours…maybe a day or two. To administer any punishment now would only (somehow) make the network look even more more dysfunctional.

So what have we learned?

Well, for starters, never evoke slavery to make a point about anything. Let’s avoid Hitler, the Holocaust and the KKK while we’re at it. Because any point made after those words or acronyms are uttered is complete lost or ignored. Palin should know better, especially since everything she says is going to be analyzed and ridiculed by the usual suspects in media on the left.

Secondly, ideology absolutely rules the day above all else at 30 Rock.

Scream a gay slur in a fit of rage on a Manhattan street? Make an apology…then get suspended (Alec Baldwin).

Accuse Hillary Clinton of “pimping out” her daughter? Make an apology…then get suspended (David Shuster).

Refer to President Obama as a “dick”? Make a (very quick) apology…then get suspended (Mark Halperin).

Suggest someone defecate and urinate in a Republican woman’s mouth? If you’re Bashir, make an apology…then see yourself be discussed on other cable news networks like Fox and CNN for a full week…and then, like John Travolta and Sam Jackson in the divine intervention hotel room scene in Pulp Fiction, look around, check for wounds, but quickly realize that despite being shot at several times at close range, you’ve somehow survived without a scratch.

No suspension. No termination. Even a 60 percent bump in the ratings (in the demo) the day of your apology…

So upon comparing the previous examples of ill-advised words and descriptions by other MSNBC personalities to Bashir, all share some common threads:

All were ad-libbed while Bashir’s comments were scripted.

All attacked Democrats (Shuster/Hillary, Halperin/Obama) or minorities (Imus on RU women’s hoops)…or a former MSNBC host (Ingraham, who may still have some friends in high places at the network).

So one has to only wonder (since MSNBC management and anchors like Chris Matthews refuse to discuss the situation publicly) what would have happened to Bashir if his comments were directed at anybody, an-y-bo-dy outside of Palin. Well, if the following poll (below) could somehow be taken of 1000 members of MSNBC’s core audience, the feeling here is the former Alaska Governor would win relatively easily:

Poll Question: Whom do you loathe most?

Just a guess…but the pick here is Palin, who would likely take home the prize at 35+ percent, with Cheney coming in a respectable second with 20 percent or so. Anyone at Fox News would be a close third with 17-18 percent, with Bush 43 and Romney splitting the remaining 25 percent (feel free to share your predictions in the comments section).

So in MSNBC President Phil Griffin’s eyes, if the people he believes make up his primary audience aren’t offended by Bashir’s comments, then it’s a case of no harm, no foul. Forget how this entire episode makes the network look to some: Unprofessional, unprincipled, disorganized, deplorable, inconsistent, indecisive and a rudderless ship without a captain…this is about protecting its sole narrative: Republicans are stupid, uncaring and racist…and therefore deserve whatever creative criticism progressive anchors, hosts and contributors can dish out.

But remember, if an MSNBC host or anchor strays from the narrative and attacks a Hillary, a Chelsea, a former employee, gays or minorities…WELL, they better have that suntan lotion packed for the kind of long, two-week vacation a nice suspension can provide.

After 11 long days, the Martin Bashir-Sarah Palin adventure appears to be over.

Accountability and authority were never invited to the party.