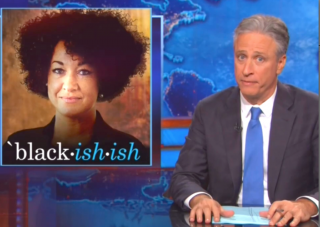 Since he doesn’t tape on Fridays, America wasn’t treated to the Jon Stewart take on the Rachel Dolezal incident. But because this bizarre story of a white Spokane NAACP leader pretending to be black has become 24/7 cable news fodder, Monday night still felt timely for The Daily Show to weigh in with a segment of “WHAAAAAAAT?”

Many pundits have tackled the story from a race/social standpoint: Namely, the question of whether race, like gender, is a social construct and therefore Dolezal could conceivably be “black” if she so desired. But as Stewart pointed out, many other pundits — particularly those of the right-leaning, Fox News type — have turned the Dolezal story into a tirade against “liberal culture gone amok” or suggestions that racism is, in fact, dead.

Conservative talk radio host Larry Elder made that latter point, going as far as to suggest that Dolezal’s actions show that being black in America isn’t such a bad deal as it’s made out to be.

“All because of one singular white person,” a befuddled Stewart pointed out. “If being black is such a sweet deal, why are millions of white people ignoring such a sweet opportunity?”

He continued mocking the punditocracy: “Clearly liberal culture has reached its nadir… all because a german lady got a weave.”