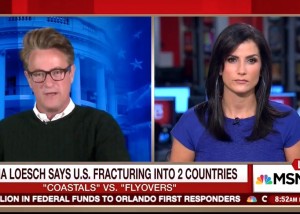 Prominent conservative media figure and host of TheBlaze TV Dana Loesch took to the friendly confines of MSNBC’s Morning Joe Wednesday to talk about her new book “Flyover Country: You Can’t Run a Country You’ve Never Been To,” and to weigh in on the success of presumptive Republican presidential nominee Donald Trump. Loesch’s premise, that “coastal elites” are out of touch with the “heartland values” of “flyover country,” is not a new one, but the ways in which she describes it are uniquely her own.

Host Joe Scarborough, who lives in Connecticut, opened the interview by saying “People like you and me say people in Manhattan need to go to the heartland,” and because they don’t, “that is why nobody saw Donald Trump coming.”

Loesch responded by observing that “Donald Trump is like this big red-headed middle finger to Washington, DC and to New York and to LA,” and described Trump as a “sledgehammer” who can “smash the system,” one which she said she’d like to take over “from the inside like a cancerous growth.”

“What are you going to put in its place?” she asked, a question Loesch says voters will have to answer.

Panelist and Huffington Post reporter Sam Stein challenged Loesch to consider that maybe “flyover” people might need to learn to accept the demographic and cultural changes that occur on the coasts, where more than half of Americans live. Loesch responded that the groups have “common ground,” and that they “want laws enforced. They don’t want to be discriminatory. They say ‘Let’s be a little more careful about who we allow in the country, and enforce the laws we have.'”

Watch the full interview above, from MSNBC’s Morning Joe.