Dave Weigel: After This ‘Horrible Week,’ Romney ‘Doesn’t Look Like A Winner’ At CPAC
video

Dave Weigel: After This ‘Horrible Week,’ Romney ‘Doesn’t Look Like A Winner’ At CPAC 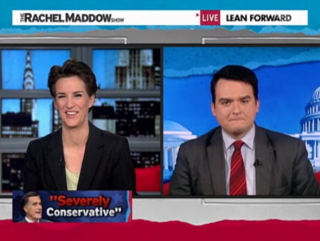 Mitt Romney spent a good deal of his speech time at CPAC this week trying to convince voters that he was conservative. “Severely conservative,” in fact. Whether that worked, however, is a topic of conjecture, and Rachel Maddow, in particular, doubts that it did. Speaking to guest Dave Weigel last night, both agreed that it appeared an uphill battle for Romney, with Weigel going further in that Tuesday’s primaries coupled with CPAC (not exactly his home turf) doesn’t make him “look like a winner.”

After a long explanation of the evolution of Mitt Romney‘s position on drug tests for some people who receive government benefits, Maddow concluded that Romney was “trying really, really hard to make conservatives like him,” and whether that was working was an open question. For Weigel, it did not seem to be in some ways because, as one person put it, “imagine them if they weren’t running for president: would Romney be talking like this?” He concluded that he would not, while Rick Santorum hadn’t changed at all, even during the time he was “a complete has-been.”

While Weigel noted that Romney “has a biography they can approve of as a businessman who hates government,” he did not think that this was the best of weeks for the campaign. In fact, “this is a horrible week for him– after losing some caucuses he didn’t really try to win, he goes to a conference he never really wins, [and] he doesn’t look like a winner in situations like that.”

Despite that, however, Weigel noted later in the chat, regarding the actual state of the race, that the delegate count was in Romney’s favor and that his loss on Tuesday was not at all as bad to the campaign as the media seemed to think it was. “Colorado was the only disappointment,” he noted, but the campaign “don’t think they wheels came off this week,” and that the conservatives they didn’t win over at CPAC were beyond their reach anyway “because they don’t think he’s more electable.”