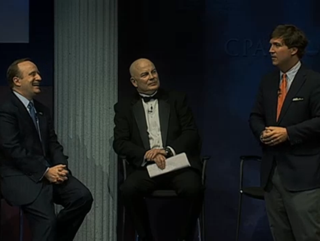 Often when talk about the best or greatest things in pop culture arises, nostalgia tends to things that, in real time, were not nearly as resplendently wonderful as they seem years down the line. If anyone ever considered that this may be the case for the single greatest debate show in history, Crossfire, Tucker Carlson and Paul Begala blew those doubts away. In a three-round “boxing match,” the two went over issues as varied as whether “America should kill all of its enemies everywhere” and word association games with “God” and “Newt Gingrich.”

“America should kill all of its enemies” was actually the real first question of the debate, which Begala answered passionately with a defense of President Obama’s foreign policy. “Osama Bin Laden is dead because of President Obama,” Begala argued, as well as several other criminals, concluding with a flourish that he did more than President Bush did, which was “cover his ass.” Carlson retorted that even if the CIA did do the work that gave President Obama the credit, “it’s an international ideology we face that he doesn’t perceive.” They went on to debate whose side loves the Constitution more– Begala jokes that conservatives love the Constitution like a husband who “loves” his wife but demands all sorts of plastic surgery– and whether the Tea Party is more racist than Al Sharpton. On that point, Carlson argued along with Begala that the Tea Party is not racist, but also defended Sharpton, saying, “Al Sharpton only hates patronizing liberal white people, and I think that’s fair– so do I!”

The debate went all over the place– Begala got booed in particular for quoting Jesus on his side, though he got applause for praising God during the word association game (Round 3), while Carlson refused to call taxation theft (“taxation is armed robbery”). Carlson put Begala in a corner asking whether Begala preferred a President Hillary Clinton to the one currently in the White House; Begala called Kim Kardashian a Republican and President Obama the “best president of the 21st Century.” For a conservative packed house, they were fairly warm towards Begala, however.

The whole thing is a worth a watch as a reminder of why many fans of cable news started watching debates in the first place– friendly but animated intelligent chatter that doesn’t feel recycled or polished to death by an overzealous PR team. If only these two guys had a TV show where they debated each other on the issues from the left and right!

Watch the debate below: