We’ve got an awful lot of reader emails practically begging us to take a look at a particular segment of Wednesday evening’s All In on MSNBC. According to these Mediaite tipsters, Chris Hayes subtly implied a connection between the “tea party” element of the GOP and the Klu Klux Klan.

Showing Ted Cruz, Rand Paul, and Marco Rubio‘s faces plastered onto “King” playing cards, these readers suggested Hayes was spelling out “KKK” while discussing how potential GOP candidates such as these three will have to play to an “insatiable” base while appeasing the wealthier interests that run the party. 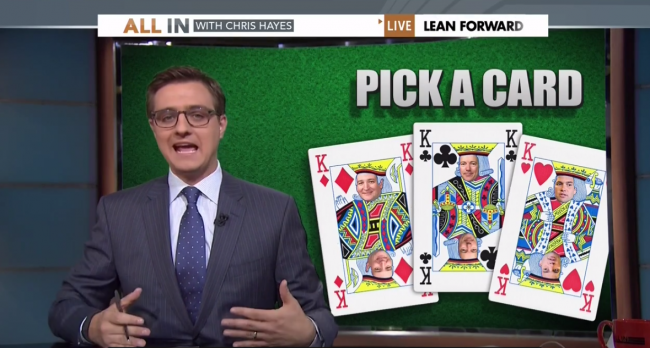 Our readers could be right that this is MSNBC having fun with subliminal messaging (perhaps getting a few laughs among graphics producers), but I’m skeptical. The left has created an often eyeroll-worthy cottage industry out of mining Fox News for subliminal messages, and so it’s probably smart for conservatives not to make the same histrionic assumptions.

Yes, the KKK-tea party comparison has been in the news lately. Yes, an outspoken Democratic congressman made the comparison on MSNBC and then sent out a fundraising email riding on such over-the-top rhetoric.

But the actual Hayes segment doesn’t touch on race at all. And if it had spoken of racial issues, we’d most certainly call the network out for poor judgement. Not to mention the fact that his guest was Ben Domenech, the conservative editor of The Federalist and someone who would undoubtedly have called out his host if he felt the segment was implying certain things about GOP leaders.

It seems as though the “king” was chosen because that’s the male-centric high card. It might’ve been odd to call them “aces,” and perhaps a bit too obvious (even for a liberal network) to call them “jokers.” (Also, there are usually only two jokers in a deck. Am I reading way too far into this already?)

Anyway, have a look at the segment below and decide for yourself. But we’re going to go with “No hidden meaning here”: