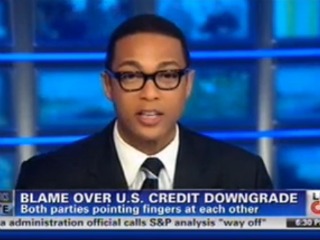 Depending on whom you ask and what he’s been up to that week, our President ranges from “definitely a socialist” to “quite possibly a moderate conservative.” The latter is a talking point CNN’s Don Lemon brought up during an interview with Demos.org’s Heather McGhee. Lemon’s question was in direct reference to an article by Fiscal Times writer Bruce Bartlett — “Obama: The Covert Conservative Liberals Have to Love” — in which Bartlett writes that “Obama has always been moderately conservative – a fact that has been obvious to liberals dating back to the beginning of the 2008 campaign.”

Lemon had previously (and not entirely seriously) asked a guest whether Obama would do well to run as a conservative in 2012:

When I said to a Democratic congressman last week, because of what happened with this debt ceiling, “Should Obama run as a conservative in 2012?,” I was being a little bit facetious there. Someone took that seriously.

Heather, do you agree with what Mr. Barlett said? Is Obama more conservative than most people think?

McGhee, for one, sides with Bartlett’s assessment:

I think definitely, certainly more conservative than the Republicans sort of like to paint him as. Look, if you look at where he is on, for example, corporate taxes. Corporate taxes are at their lowest share of the economy than they’ve been in generations. And he actually wants to reform the tax code but not raise any more money from corporations. That’s a pretty conservative position.

But this is the problem, is that that he’s never going to get any credit from that from Conservatives because, you know, they’re really very focused on wanting him to fail more than they are wanting the economy and working families to succeed. It’s really quite shocking to watch.

Have a look at the segment, from CNN: