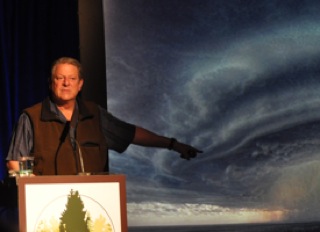 Former Vice President Al Gore‘s crusade to stop man-made climate change hit the road last week as Gore attended the Aspen Institute’s “Networks and Citizenship” media panel to discuss those who do not believe in his cause. In a rage-fueled rant against his detractors, Gore told the audience that much of the anti-global warming rhetoric came from a small group of people “washing back at you the same crap over and over and over again” who had made it unacceptable “to use the goddamn word ‘climate.'”

Gore began by comparing the anti-global warming block to tobacco lobbyists who “succeeded in delaying the implementation of the surgeon general’s report for 40 years… It was evil, evil, evil.” He declined to name names, but gave the impression that a small group of people were benefiting from the debate by paying for alternate and less reliable theories to come out against climate change:

And some of the exact same people — I can go down a list of their names — are involved in this. And so what do they do? They pay pseudo scientists to pretend to be scientists to put out the message: ‘This climate thing, it’s nonsense. Man-made CO2 doesn’t trap heat. It may be volcanoes.’ Bullshit! ‘It may be sun spots.’ Bullshit! ‘It’s not getting warmer.’ Bullshit!

What seemed to get him angriest, however, was the prospect that those that believed in global warming were outnumbered. “You heard them washing back at you the same crap over and over and over again,” he cried, arguing that there was “no longer a shared reality” from which to begin scientific study and that those that shared his reality were being hindered by the debate. “It’s no longer acceptable in mixed company, meaning bipartisan company, to use the goddamn word ‘climate,'” he railed.

The speech also included some talk on the current fiscal crisis in America, where Gore noted that the country had not been served well by lobbyists paying for public advertising for their causes, and stating that the wide dissemination of the idea that spending and not revenue was the problem had led to the second recession, and that was “absolutely insane.”

Listen to Gore’s statements below: