Donald Trump: Anna Wintour Ambassadorship Would Be ‘A Favor To The Country’
video

Donald Trump: Anna Wintour Ambassadorship Would Be ‘A Favor To The Country’ 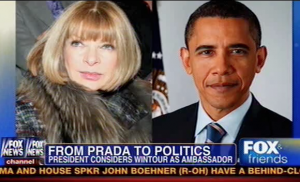 Donald Trump baffled many when he tweeted in favor of an ambassadorship for Vogue editor Anna Wintour. Of course, that’s only a rumor — but Trump elaborated on his support for Wintour when he called into Fox & Friends on Monday. She would do an “amazing” job, he said.

Wintour is rumored to be in the running for an ambassadorship to the UK or France. A strong Obama supporter, she was one of his big bundlers during the campaign.

Gretchen Carlson segued into the topic by noting that she and Trump actually agree on this issue. She doesn’t have a problem with it, she said, because ambassadorships, in many cases, are “political favors to people who raised a lot of money on them.”

“I don’t view it as a favor,” Trump replied. “I think this is a favor to the country.”

He went on to praise her as a “very capable person,” who is “tough,” “smart,” and “gets it.” Especially in the over in the UK, he said, which is “her territory, she would run it so well. She would do things I think nobody else could do in that position.”

The praise based on her being “very competent,” Trump said. He went on to highlight the “amazing job” she’s done at Vogue… and characteristically took a shot at other magazines — namely, New York. “They’re terrible.”

“Look at the job she’s done at Vogue,” he said. “It’s been absolutely amazing, and I think that she would be an amazing choice. I think she would be truly a great ambassador.”