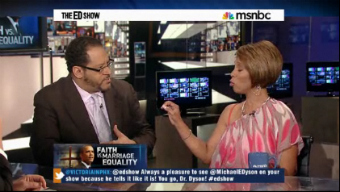 One week after President Obama‘s official endorsement of same-sex marriage, MSNBC played host to a debate over how the decision divides the black community into “civil rights” versus “biblical truth” camps. Last week, Georgetown professor and MSNBC contributor Michael Eric Dyson called out what he saw as “sexual rednecks” within the black church who oppose same-sex marriage, including Sophia Nelson, a writer for TheGrio. The Ed Show brought the two of them on to debate.

Dyson started out by apologizing for calling Nelson and others like CNN’s Roland Martin “sexual rednecks” for their opposition to same-sex marriage. “In a fit of passion I called out my friends, in the spirit of love, to say that hey, we can do better than this, and I shouldn’t have called their names if they weren’t here to defend themselves,” he said, and then went on to clarify his argument and admit that he “conflated two issues: the marriage equality which is very serious and a significant issue on the one hand, and the black homophobia as I perceived it within black communities. Homophobia is not something that’s endemic to black people – it’s across the globe so to speak. But in this case, black homophobia fuels, I think, the beliefs about black gay and lesbian people and whether or not they can get married.”

Nelson accepted Dyson’s apology for calling her a “sexual redneck,” but went on to say that even though she is opposed to same-sex marriage for non-“insidious” biblical reasons, “I support hate crimes legislation for people that would abuse or hurt gays and lesbians, I support civil unions, I support adoption, I support them being able to visit their loved one in the hospital. So there are people like me of faith who don’t agree with same-sex marriage for the faith reason, the biblical reason, the definition of a man and a woman being married, but I also support a lot about the agenda.”

Dyson, an ordained minister of more than 30 years, said that a literal interpretation of the Bible over same-sex marriage is the problem, since it would mean killing gays and lesbians. “I don’t think Sophia Nelson is promoting the biblical interpretation that gays and lesbian people should be killed, and if she is, she hasn’t put that forth. And if she doesn’t, then she doesn’t take the Bible literally.”

The two then got feisty when Nelson explained that she and other black churchgoers were offended to be called bigots for their faith-based views on gay marriage, with Dyson eventually explained that he used the terms “sexual rednecks” and “sexual bigots” because of a quote from Howard Thurman, who said “a bigot is a person who makes an idol of his commitment.”

“You’re throwing [the gay community] a bone by saying, ‘Look, I believe in civil unions’ and the like, but what you’re not addressing is the fact that your faith fuels the belief that to be gay is to be automatically a sinner, to be gay is to be outside of the covenant of God. And I’m arguing that that automatically disqualifies gay and lesbian, transgender and bisexual people as your equals in the faith.”

“You cannot say that our faith is causing us to be homophobic or bigoted,” Nelson responded, quoting several scriptures that she says ground her views on marriage. “Your issue’s with God, not with me.”