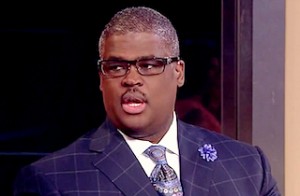 Fox Business anchor Charles Payne has been suspended by the network while it investigates sexual harassment allegations made against him by a female political analyst.

According to Variety, a network spokesperson stated that Payne will be “suspended pending further investigation.” The network issued the following statement:

“We take issues of this nature extremely seriously and have a zero tolerance policy for any professional misconduct. This matter is being thoroughly investigated and we are taking all of the appropriate steps to reach a resolution in a timely manner.”

Per the Los Angeles Times, Payne carried out an extramarital affair with the analyst while she made frequent appearances on both Fox Business and Fox News from 2013 to 2016. She claims that after she ended the relationship with Payne, her appearances dried up, as well as her hope to become a paid network contributor. She also stated that she was coerced into the sexual relationship. (According to the Huffington Post, Scottie Nell Hughes is the analyst.)

Payne admitted to the affair in a statement to the National Enquirer that was published yesterday. In the statement, he apologized to his wife and children.