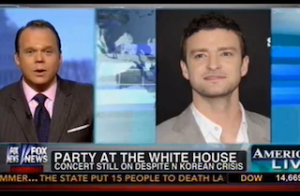 This afternoon on Fox News, Megyn Kelly and Chris Stirewalt presented a preview of sorts for an event happening at the White House this evening celebrating “Memphis Soul” music. The concert, featuring performances by Justin Timberlake, Queen Latifah, Al Green and others, is part of PBS’ ongoing “In Performance At The White House” series. But the Fox commentators questioned President Obama‘s decision to move forward with the event given the budget constraints put in place by the sequester.

Kelly began the segment by presenting the dilemma as she sees it: “Can’t afford to open up the people’s house to tours, the people can’t go see the White House that they pay for, but the Obamas can see Queen Latifah and Justin Timberlake.”

Stirewalt related the current situation in Washington to the short-term partial government shutdowns in the mid 1990’s under President Clinton. Back then, he said, Clinton could tell his wife and his family and tell the social secretaries and tell everybody, cheese it, we’ve got to be cool for a while, don’t do anything because this is the austerity, this is the shock and awe, this is what we’re supposed to be doing.” But, Stirewalt added, because President Obama is playing a “long-game” on the budget, “he has to tell his wife and he has to tell the social directors and other people, whatever you do is going to be seen by the American people through a different lens while we’re pulling this budget stuff.”

Kelly concurred, saying that while she’s sure the Obamas will have a “grand old time” with Timberlake tonight, “how will it make the members of the military who have been furloughed feel?” She acknowledged that the event is part of the 30-year-old series that brings artists to the White House and shares those performances with the country through public television, “but that doesn’t change the perception for the people who are sitting on their couch wondering where their job is.”

While the White House will no doubt be spending some additional security budget for the event this evening, as PBS outlines on the website for the series, not all of the funding is public. According to the fine print, “Corporate funding for the program is provided by Pepsi-Cola. Foundation support is provided by The Annenberg Foundation and the Anne Ray Charitable Trust. Major funding is also provided by the Corporation for Public Broadcasting, PBS and public television viewers.”