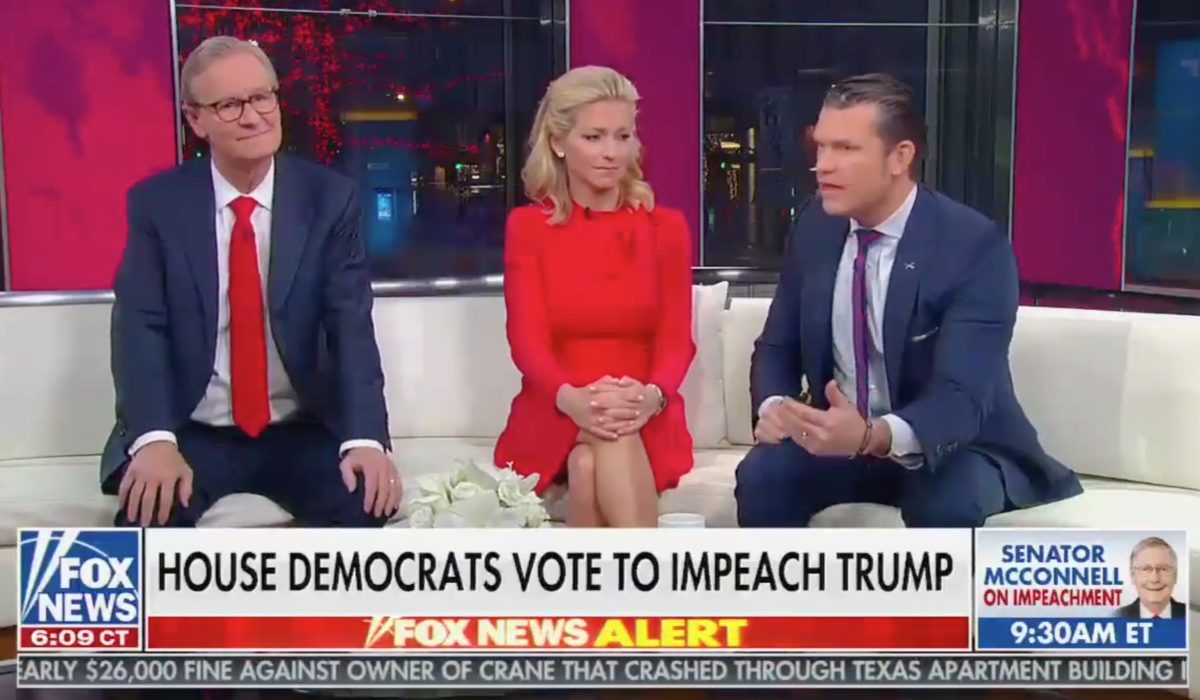 Over the course of the three hours that Fox & Friends was on air Thursday morning, there was not one mention of President Donald Trump’s unseemly and mean-spirited comments made towards Rep. Debbie Dingell and her recently deceased husband John Dingell during a self-described “Christmas Rally” in the Dingell’s home state of Michigan.

A search of the close-caption transcript of the Fox News morning show revealed no mentions of the last name Dingell from 6 AM to 9 AM. A similar search on Grabien revealed the same.

On the same evening of being impeached, Trump began his comments by calling Dingell’s widow, Debbie, a “real beauty” and then launched in a story about his condolence call the late Congressman’s wife. “So she calls me up like eight months ago, her husband was there a long time,” he said before noting he didn’t give Dingell the  B treatment, ‘ but instead gave him the A-plus treatment instead, even though he “could’ve” given him lesser treatment.

Then speaking of the call with Dingell’s wife, he said: “She calls me up and says it’s the nicest thing that’s ever happened, thank you so much. John would be so thrilled. He’s looking down, he’d be so thrilled. Thank you so much, sir. I said that’s okay, don’t worry about it.” Implying he may not be in heaven, Trump then quipped, “Maybe he’s looking up I don’t know?” “Maybe, maybe,” the president continued on about the late Congressman. “Let’s assume he’s looking down.”

Coverage of these comments has nearly eclipsed that of the historic impeachment vote from Wednesday night, as both CNN’s New Day and MSNBC’s Morning Joe have featured bipartisan condemnation of Trump’s unseemly comments. Even Maria Bartiromo sympathizing with Dingell while blasting to Trump’s unnecessary attack during a morning interview on Fox Business.

But Fox & Friends producers chose to completely ignore the story, which only underlines the criticism that the top-rated opinion-based morning show is only interested in sharing news and information that is politically beneficial to President Trump, who reportedly finds Fox & Friends to be his favorite show.

In the 9 AM hour, Rep. Dingell appeared on Fox News news show America’s Newsroom, where co-host Sandra Smith called the president’s comments “hurtful,” though it is worth noting that producers did not air the rally comments in question.

Fox & Friends DID cover the impeachment (which was derided as “all fake”) and the Christmas rally. But the President’s cowardly “counter-punching” a man who has been dead for almost a year? That didn’t make the rundown.