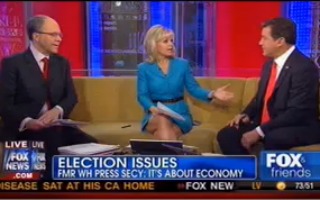 On Monday morning, the Fox & Friends crew discussed just how President Barack Obama and his campaign were using “the perception of” an improved economic climate and “continued positive job-growth… whatever that means” to help his re-election efforts. They looked in particular to comments former White House Press Secretary Robert Gibbs had made over the weekend.

“It is perception,” said Gretchen Carlson. “It’s perception of which direction the country is heading in. I mean, I just think it makes for interesting argument because the Republicans have been banking on the fact that the economy would be their talking point, right? And so now if the economy, perception-wise, appears to be going in the right direction, I think they’re going to be all over it.”

RELATED: Obama To Fox Reporter: Do You Think A President Seeking ‘Re-Election Wants Gas Prices To Go Up Higher?’

“They can spin it all they want on the left,” said Eric Bolling, “but the reality is 14 million people still out of work. $3.80 a gallon gasoline. I’m not sure what’s so good and what the uptick is.”

The group also wondered how President Obama’s campaign would use former President George W. Bush to its advantage where the economy is concerned. “So,” said Carlson, “it appears that blaming Bush is the other way that you handle it when the economy is not doing so well. When the economy starts to do better, then take credit for it.”

And the “Blame Bush Patrol,” they agreed, will continue. Watch, via Fox News: