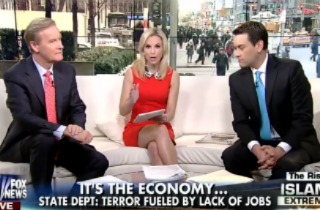 According to the hosts of Fox & Friends, because several Guantánamo detainees released to Uruguay have refused job offers, there is now definitive proof debunking the Obama administration’s belief that a lack of job opportunities contributes to radicalization.

The morning show gabbers made the assertion in response to State Department spokeswoman Marie Harf‘s comments that violent force is not the only way to defeat ISIS forces abroad. “We cannot win this war by killing them,” she told MSNBC earlier this week. “We cannot kill our way out of this war. We need in the medium to longer term to go after the root causes that leads people to join these groups, whether it’s a lack of opportunity for jobs.”

Pointing to today’s story that the six detainees released for resettlement in Uruguay have turned down job offers, F&F host Elisabeth Hasselbeck declared: “The jobs for jihadis program isn’t going so well.”

She explained: “[Uruguayan] president [José Mujica], who pushed the program through, went to go visit them and after his visit, he said on his radio show that the former detainees are far from the ancestors of Uruguay who are gritty, hard working immigrants. So these detainees who were put there, don’t have the hard work and grit that the people of Uruguay do and he says they were offered jobs and they turned them down.”

Steve Doocy chimed with some snark aimed at Harf: “If you’re watching right now… just know when you’re saying what they need are jobs, this is concrete evidence that these particular detainees — probably formerly in the terror business — they don’t have a work ethic and they don’t want a job. Actually maybe they want a job, they just don’t want to work.”

“They’ve had offers and turning them down,” Hasselbeck got in one last swing. “So much for ‘jobs for jihadis.'”