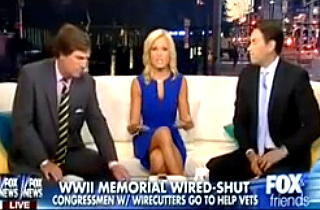 The satirical website, which is less obviously satirical than the Onion (and some would say far less funny) fooled Fox News host Anna Kooiman into believing its fake story that President Barack Obama was using personal funds to keep a Muslim museum open during the government shutdown.

Of course this juxtaposed perfectly against a story of veterans being denied entry into the World War II memorial, which was probably the National Report’s goal all along.

“The Republican National Committee is offering to pay for it to keep it open so that the veterans from Honor Flight are going to be able to go and see this because who did it honor? It honored them,” Kooiman said on Fox & Friends Saturday morning. “It really doesn’t seem fair, especially—and we’re going to talk a little bit later in the show too about some things that are continuing to be funded. And President Obama has offered to pay out of his own pocket for the museum of Muslim culture out of his own pocket, yet it’s the Republican National Committee who’s paying for this.”

“The Muslim community deserves our full acceptance and respect. We have killed millions of Muslims overseas since the September 11th attacks. They are not all bad. In fact most of them are good. So during this shutdown, now is a great time to learn about the faith of Islam. I encourage all of you to celebrate the Muslim community, the ‘Sunnah’ and the magic of the ‘Quran’. All of this can be found at the newly re-opened International Museum of Muslim Cultures.”