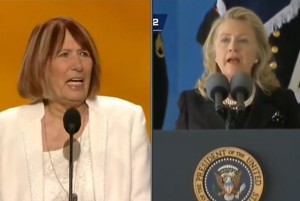 Former Secretary of State and current Democratic presidential nominee Hillary Clinton took to Fox News Sunday for her first post-convention interview, and host Chris Wallace made Secretary Clinton feel right at home by grilling her about claims by Patricia Smith and the father of Tyrone Woods that she blamed an internet video for the attacks in Benghazi that killed four Americans. Those claims are disputed by Hillary and other Benghazi family members, but Wallace asked Clinton “Why would they make that up?”

Chris, my heart goes out to both of them. Losing a child under any circumstances, especially in this case, two State Department employees, extraordinary men both of them, two CIA contractors gave their lives protecting our country, our values. I understand the grief and the incredible sense of loss that can motivate that. As other members of families who lost loved ones have said, that’s not what they heard, I don’t hold any ill feeling for someone who in that moment may not fully recall everything that was or wasn’t said.

Wallace also claimed that Clinton spoke about the video, but not about terrorism, in her remarks at the transfer of remains ceremony, but as Hillary mentioned, Wallace only needed to roll the tape back a few seconds to see that was not true:

The president of the Palestinian Authority who worked closely with Chris when he served in Jerusalem sent me a letter remembering his energy and integrity and deploring, and I quote, “an act of ugly terror.”

This has been a difficult week for the State Department and for our country. We’ve seen the heavy assault on our post in Benghazi that took the lives of those brave men. We’ve seen rage and violence directed at American embassies over an awful Internet video that we had nothing to do with.

The mother of slain Ambassador Chris Stevens has denounced the politicization of the Benghazi attacks.