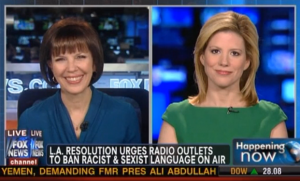 The Los Angeles City Council is trying to reign in racist and sexist comments on the radio by introducing a nonbinding resolution that would insist that LA stations “do everything in their power” to avoid such derogatory language. The move comes following the Rush Limbaugh debacle and comments made about Whitney Houston by KFI-AM hosts John Kobylt and Ken Chiampou, in which they referred to her as a “crack ho.”

The resolution, which passed by a 13-2 vote, originally just targeted Clear Channel, but has been amended to include all local media outlets. It also encourages hiring more women and minorities (of KFI’s 15 on-air hosts, only one is female and none are African American). Councilman Paul Krekorian said the effort does not impede on free speech rights: “It’s exactly appropriate for this council to speak up against the vile things we hear on the airwaves.”

Powers asserted that the move is “perfectly appropriate” because it is “doesn’t have any kind of legal power over anybody.” They’re just saying “this is not the kind of talk we want to have on the airwaves, it’s not how we want to talk about other people. I don’t think there’s anything wrong with that. I think we should be able to, in this day and age, I think it’s 2012, I’m pretty sure, that we can all come to agreement that we don’t call people racist terms, we don’t call people misogynist terms.”

It’s “kind of startling,” Powers continued, “that this is even something we have to debate.”

Miller disagreed, citing First Amendment concerns. “When we start talking about what we’re going to tolerate on the air, and not tolerate on the air, and it’s a government agency speaking — whether it’s the city council or the U.S. Congress, or the White House — that always makes me nervous,” she said. “Because censorship is not the answer to this kind of foul language or sexist or misogynist language. What should happen is what did happen […] those guys got suspended for seven days, they are now in cultural sensitivity training.”

“Because this doesn’t have any sort of legal force, then I don’t think there’s a problem,” Powers reiterated. “They’re sort of stating the obvious to me. It’s obvious that they shouldn’t use that term to describe Whitney Houston.” The problem, she said, is that people tend to get “selective” about what they get outraged about.

If you don’t like what you’re seeing, if you don’t like what you’re hearing, shut it off. Don’t go demanding that the city council start passing resolutions. […] You don’t want this slippery slope toward censorship. Freedom of speech is just so hard to preserve in this country. We have a really wide berth here, we want to maintain. We want more debate and discussion, but we want civilized debate and discussion.

Powers’ point about the resolution’s lack of any real power is worth noting. There’s no real way to enforce such an initiative. Furthermore because there’s such a vast grey area. Of course there are some instances of derogatory language that are black-and-white, when nearly everyone can agree a comment went too far. But often we find ourselves witnessing bickering about whether a joke is funny or racist; whether a comment is just politically incorrect or downright sexist. It’s not always cut and dry — which means there’d be further disagreement on where to draw the line.

Miller brings up the First Amendment issue that obviously comes to mind. While the resolution lacks an assertive enforcement mechanism, it is, as she says, a slippery slope. As Salon’s Mary Elizabeth Williams points out, listeners and the general public will react when someone crosses the line (with the Limbaugh remarks being Exhibit A):

Programmers and directors and radio hosts themselves need to learn from their shrinking profits and listener numbers that bigotry and stupidity are unwelcome in our drive times, and change their tones and their talent rosters. That’s more effective than a slap on the wrist from the FCC or a scolding from the city council for an individual crack here and there.

It’s smarter, she argues, to “keep raising our voices in protest and hitting the hatemongers where they hurt most — the advertising cash flow.” Some may raise the issue of selective outrage (we’ve heard, more than once, the idea that there’s only outrage when the remarks in question come from a personality on the right side of the political spectrum). But, as Powers says, isn’t selective outrage possible with such a resolution too?

It may be obvious that we shouldn’t use such language, but such a resolution isn’t the effective way to go about tackling the problem.