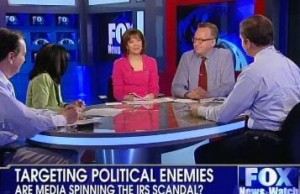 Jon Scott led a Fox News Watch roundtable on Saturday afternoon on media flippancy over the IRS scandal. “Are the media taking this seriously?” he implored.

“I think the media are taking this seriously,” reporter Judy Miller said, “because this part of a trifecta of scandals, and one of those legs involves us.”

“I think I heard Judy say that the media are giving this adequate attention,” said Jim Pinkerton, a former Reagan and Bush White House staffer. “Did I hear that right? I just couldn’t quite believe my ears.”

“The exciting news about Obama’s picture from senior prom in 1979 got way more attention on the morning talk shows than did the IRS scandals,” Pinkerton said, referencing right wing media watchdog NewsBusters. “Come on, Judy, give us a break.”

Richard Grennel, a conservative foreign policy spokesman, also disagreed, claiming that the media had long avoided the IRS story, and were still attempting to dismiss it:

This started in March of 2012, Alan Fram at the Associated Press wrote about the IRS targeting conservatives, except his whole take was ‘this is just typical complaining.’ Fast forward to this week, we had NPR doing two different stories, Brian Naylor interviewing liberal groups saying, ‘Well, it took us a very long time to get our tax exempt status as well, so this is just pretty typical.’ And then you had Scott Horsley, the NPR White House reporter, who just chalked the whole thing up to, ‘The law is just confusing.’ I don’t think Judy is right at all, I don’t think the media are taking this seriously.

Fox analyst Ellen Ratner was shocked that journalists had and expressed opinions. “Some people who are reporters leaned into past reporting,” she said, “such as Chuck Todd from NBC, who said, ‘Republicans better not overreach because this would come back to haunt them.’ I was shocked when I heard them say that.”

“Because he’s supposed to be a reporter, not a commentary person.”

“Is it possible for Republicans to look into this without appearing partisan?” Scott asked Thomas.

“Everything is partisan in Washington,” Thomas said. “You’d have to be completely neutered, you’d have to be from another planet not to be partisan.”

“These hearings are very, very useful,” Thomas continued, “carried on Fox live, carried on C-Span. In the old days, you had to rely on the three broadcast networks to use snippets through the prism of their bias. People can actually tune in now and watch these clowns up there squirming after taking their oaths and dissembling, especially with the IRS, who nobody likes.” (That is, of course, until Congress goes on recess and Issa can’t call those useful hearings, but that’s another column.)