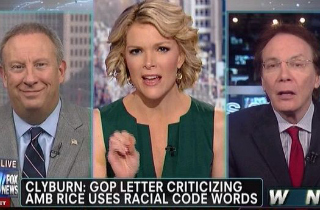 “I don’t know what it’s like to be discriminated against because of the color of my skin. Obviously, I’m a white guy,” began Gallagher. “But it seems to me this argument precludes any criticism from ever being leveled against her.”

He continued: “The fact is that some people hear racist thoughts when there is no racist intent, and now Clyburn, who is a long-time race baiter, he’s done this for years, he’s now trying to, I believe, stifle any criticism, of Rice by hiding behind this mean-spirited charge. I just find it sad.”

“The American people have already decided that the attacks were not going to play,” Colmes shot back. “They decided that when they re-elected Barack Obama, against Republican wishes, that this kind of attack would have changed the result of the election. And I just don’t think it’s wise for Republicans, on the heel of the election, to pick as their first target an African-American woman, a very accomplished one.”

He explained further: “Just from a purely politically-strategic standpoint, I don’t think it makes sense. This is a woman who had nothing to do with Benghazi, she gave information that was given to her by the intelligence community. she did it without prejudice and without trying to take one side or the other.”

Host Megyn Kelly pushed back, asking whether Clyburn’s comment was “merely dividing us by race, saying Susan Rice should be treated differently because she’s African-American.”

Colmes replied: “The first thing they do is to go after an African-American woman. I think it makes no sense when they are trying to broaden the party.”

After laying out why he believes Ambassador Rice was truly incompetent in her handling of the Benghazi attacks, Gallagher then challenged Colmes on his racially-based strategizing: “Would it be smarter to go after a white woman?”

The two guests then had a bit of crosstalk, battling over whether or not Rice did a good job after the attacks, with Gallagher eventually accusing Colmes of his side “suggesting that people of color should be given immunity.”