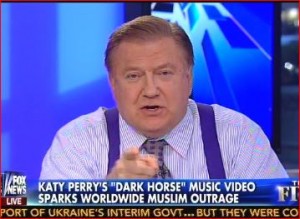 Bob Beckel was absolutely incensed today at how Muslims all over the world are absolutely outraged by a “blasphemous” Katy Perry music video but haven’t said one word about Islamic militants massacring schoolchildren in Nigeria. There is currently a Change.org petition to pull the video from YouTube that currently has over 65,000 signatures because there is a scene that depicts a man with an “Allah” pendant who gets disintegrated at the behest of the Egyptian queen, Perry.

Beckel went off on the Muslim community for directing their outrage on the video rather than on violent acts of terror:

“What they’re not petitioning worldwide to do is to protest the fact that 59 Christian kids were killed in their sleep by a bunch of Islamic cowards, and once again, not one of you––not one head of state of a Muslim country or cleric or imam has said anything. I’m not even gonna question it anymore, you’re a bunch of cowards.”

Eric Bolling called for some perspective, pointing out that Christians were bothered by Perry’s witch imagery at the Grammys, but it didn’t rise to the level of fury that’s surrounding the new video.

“If your prophet wanted [the Nigerian massacre],” Beckel concluded, “you might want to look other places.”