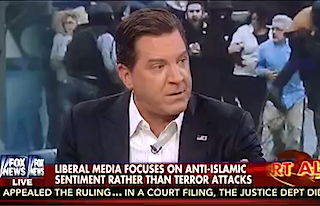 During a segment on The Five Friday after the media coverage of the terrorist attack on French satirical magazine Charlie Hebdo, Eric Bolling took things several steps further than his co-hosts were willing to go when he said liberals who are tweeting #JeSuisCharlie have more in common with Al Qaeda than the murdered cartoonists.

In his comments, Bolling referenced a piece that ran today by New York Times columnist David Brooks, titled, “I Am Not Charlie Hebdo.” In that column, Brooks suggested that the same cartoonists celebrated as “martyrs” after their deaths would never be allowed to publish their controversial work in the newspapers of American universities due to concerns over political correctness. This idea also mirrors points made by Bill Maher on the subject earlier this week.

But Bolling pushed his rhetoric beyond those two by comparing those who reject words and images that could offend Muslims to radical terrorists. He said people at universities who last year “killed free speech” by getting controversial figures disinvited from events “align more closely with the terrorists in Paris than they do with the people from Charlie Hebdo.”

To the people tweeting #JeSuisCharlie or “I am Charlie,” Bolling said, “No you’re not. You’re the opposite. You’re more Al Qaeda than you are Charlie.”

“You didn’t really mean that, right?” Dana Perino asked him. When Bolling doubled down, she added, “I was just trying to prevent the backlash.”