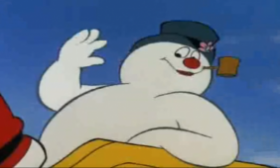 As a promo for Frosty, airing on Dec. 18th, CBS has recut scenes from the animated favorite into two videos, one with audio from the crass, womanizing Barney from “How I Met Your Mother” and the other from the crass, womanizing Charlie from “Two and a Half Men.” As a result, the videos — while awesomely featuring Mediaite fan fave Neil Patrick Harris (as well as the voice of Charlie Sheen) — trade off a pretty funny result for grownups with a pretty sacriligious result for kids. Who, by the way, presumably know how to Google, and thus an innocent search for “Frosty The Snowman CBS” would lead to multiple page one results for Frosty the Promiscuous Potty-Mouth.

If this was a mash-up by a private citizen that would be one thing, but this is an official promo by the network, linking the holiday classic forever with notions of sex in front of a classroom of people and picking up single mothers in the parking lot of Chuck E. Cheese. Yes, I think it’s funny; no, I don’t think it’s a good idea. Really, CBS?

Watch and decide for yourself below.

Frosty Meets “How I Met Your Mother”:

Frosty Meets “Two And A Half Men”:

GIVE ME BACK MY CHILDHOOD, CBS! I will never look at Frosty the same way again.