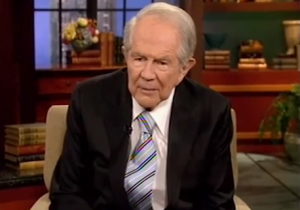 Time for today’s installment of Old Man Says Something Crazy About Technology. Reverend Pat Robertson decided last week that committing a sin like murder in a video game is, in the eyes of God, basically the same thing as killing an actual, living, breathing human being. So if any of you have been playing GTA recently and you’ve stolen cars, run people over with stolen cars, and/or shot people while you’re driving a stolen car, you have committed what Robertson describes as virtual sins.

RELATED: AR-15s Or RPGs? Senator Says On MSNBC That Video Games Are ‘Bigger Problem Than Guns’

Robertson was responding to a viewer question about how the Bible views video games, and if the Bible considers a sin in real life to be equally sinful even if it’s committed in a virtual world. Robertson, who admitted he’s “never played a video game” in his life, gave this thoughtful answer.

“Your spirit is what God’s concerned about, and what is your spirit active in? Jesus said if you look on a woman with thoughts of lust in your heart, then you’ve committed adultery with her. So that’s a virtual sin.”

And lusting after a cybergirl could perhaps be a legitimate virtual sin (I use this phrase very loosely here). But virtual violence? Where not a single one of God’s actual creatures is harmed?

Robertson, it should be noted, isn’t the only one who feels this way. Christian gaming company Inspired Media Entertainment created a series of Left Behind games that take place after the Rapture, and according to the Wikipedia page for the first game in the series, “the player’s main goal is to use conversion rather than violence.” Fun for the whole family!

Robertson continued, “And so, if you’re murdering somebody in cyberspace, in a sense you’re performing the act, like it or not.”

Well, since we’re already down this “video game morality” road, I’d be curious to know what God thinks about the Walking Dead game. Yes, you’re mowing down people left and right, but they’re zombies! Hordes of the undead! The moral thing to do would be to put them down, right?

But at least this is a different perspective on the ridiculous “video games trigger violent behavior” talking point. The most significant way video gamers are drawn to violence is when they lose a boss fight and chuck the controller at the TV screen.