George Will: New Gun Laws Will Not Make A ‘Particle Of Difference’
video

George Will: New Gun Laws Will Not Make A ‘Particle Of Difference’ 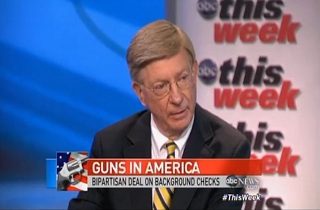 Washington Post columnist George Will dismissed the idea that any of the legislation being proposed by the House or Senate will an impact on gun violence in the United States. Will added that the president has spend the most valuable part of his second term on this legislation, too, and is barely getting any of the things he wanted with regards to guns through Congress.

At one time it seemed like a ban on so-called assault weapons, along with high capacity magazines, was likely to become the law of the land but less than four months after the massacre at Sandy Hook Elementary School it appears those proposals are going nowhere. Now, the only part of President Obama’s call for gun reform that is being given serious consideration, universal background checks, is in jeopardy, too.

“Does anyone at this table believe that when the Senate and House do whatever they’re going to do that it will make a particle of difference in preventing future Sandy Hooks? ” said Will, banging his hand on the table.

Washington Post columnist Ruth Marcus said she thinks whatever is passed will make a difference. She add that she thinks “we’re at an extraordinary moment when it’s easier for Democrats and Republicans to support same sex marriage than it is to support the same law passed in 1994.”

The 1994 law she is referring to is the original assault weapons ban that was part of the Violent Crime Control and Law Enforcement Act of 1994.