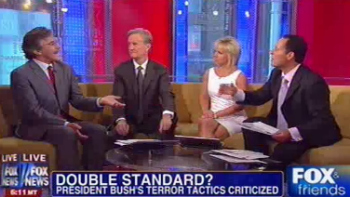 On Friday’s edition of Fox & Friends, Geraldo Rivera got into a feisty debate with the hosts over whether the reports of President Obama‘s use of drone strikes and a “kill list” constitute a double-standard, given that the president campaigned against his predecessor’s use of the same military technology. Rivera objected that he doesn’t care about a double-standard and just wants the terrorists dead.

Host Gretchen Carlson asked Rivera, “[President Obama] campaigned so viciously … against George Bush’s policies and his ways of attacking terror, and now some people are saying, this is even worse?”

Rivera explained that, “The drones are the magnificent weapon that have finally allowed us to win the War on Terror. We are winning the War on Terror. How? By these slow-moving but precise and deadly weapons that can pinpoint, reducing civilian collateral damage, taking out a specific terrorist enemy. They have been a magnificent asset to our forces.”

Co-host Brian Kilmeade pressed Rivera, “So how do you feel about the way we’re using them?”

Rivera responded that despite criticism about “how bloody it is and how, in a way, how savage it is or how deadly in every regard drone strikes are, I don’t care about any of that … I like that we are killing bad guys.”

The show then played a clip of Charles Krauthammer saying that the Democrats have “lost the moral high ground” by now supporting the president’s “killing people from the air” while criticizing former President George W. Bush over his use of enhanced interrogation.

“Yes, but the George Bush would have been crucified for doing these drone attacks,” Carlson objected.

Rivera responded that the drone technology wasn’t as good under Bush, and that these drone strikes are an effective way to keep our soldiers out of harm’s way. Kilmeade interjected that capturing terrorists is better because it gives us information, which prompted Rivera to say: “I want them dead! I want them dead! … Do you want to send your son into Pakistan to go snatch a bad guy, or do you want to kill him from the air? You know he’s dead.”

“I don’t know what motivates the administration,” Rivera replied. “I’m not a politician. What I do know is that our military in Afghanistan is a lot safer because we are eliminating Al-Qaeda. …. War is killing them before they kill you.”

“But if you can kill five by capturing one,” Kilmeade shot back.

Kilmeade shouted, “We got them at Gitmo! We got them! We had hundreds, we gave a few away.”

“I think the intelligence from these people is very suspect,” Rivera responded. “If you’re a foreign fighter in the tribal territories, you are now at war with the United States … [which] means you’re out to kill us or we’re going to kill you first.”

The discussion then devolved into crosstalk, with Kilmeade insisting, “Not true. Not true,” and co-host Steve Doocy saying, “The problem is dead men tell no tales.”

“A dead terrorist is a good terrorist,” insisted Rivera, closing the argument.

Watch the debate below, via Fox News: