Hecklers And Hysteria: Media Ignores How Mitt Romney Has Apparently Lost His Mind

Hecklers And Hysteria: Media Ignores How Mitt Romney Has Apparently Lost His Mind 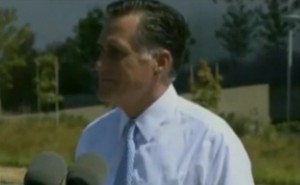 Burying the lede is nothing new, but none of the headlines to emerge from Thursday’s political news cycle even comes close to touching the most shocking, revealing story of the day: Mitt Romney, if you believe what comes out of his mouth, has apparently lost his mind. It’s been heavily reported that hecklers interrupted Obama advisor David Axelrod‘s press conference, then secondarily reported that Mitt Romney bragged about sending those hecklers. Hardly anyone has reported on Romney’ explanation for his super-secret Solyndra field trip, or connected the delusional dots.

Our political news media are so wrapped up in the prizefight score-keeping of this political campaign that they’ve cast Romney’s decision to send hecklers to disrupt a rival event as just another “game on!” moment. While this sort of thing probably happens in political campaigns from time to time, though, it’s not something a political campaign would ever admit to, let alone brag about, let alone have their candidate for president brag about. That fact alone should have made this the number one story of the day.

On top  of that, though, as he was bragging about sending staffers and supporters to disrupt the Obama campaign’s press conference, Gov. Romney launched a paranoid, completely false accusation at the President. Most outlets, even liberal ones, are playing this quote: “At some point you say, you know what, sauce for the goose is sauce for the gander. If they’re going to be heckling us, why we’re not going to sit back and play by very different rules.”

That’s weird nonsense on its own, since no one has remotely accused the President of sending hecklers to Romney events, that’s insane.

But in the next breath, Romney makes the explicit charge that President Obama is behind all the anti-Romney protesters. “If the President’s going to have his people coming to my rallies and heckling,” he said, “why, we’ll show him that we conservatives have the same kind of capacity he does.”

Let that sink in. Mitt Romney thinks that the President of the United States is arranging for hecklers to appear at Mitt Romney events. Protesters and hecklers show up to every political event for every candidate, all the way back to the Og For Cave-President campaign, but Mitt Romney thinks President Obama pushes the “mic check” buttons. Not insane enough for you?

Mitt Romney’s press conference yesterday, in front of a shuttered Solyndra headquarters, was shrouded in the kind of secrecy that usually attends dinners between Michael Corleone and Virgil Sollozzo. The Romney press corps were herded aboard the bus and not told where they were going. Asked at that press conference why the need for such secrecy, Romney replied that “I think that there are people who don’t want to see this event occur,” later adding “I think there are a number of people among the President’s team that don’t want that story to get out. We wanted to make sure it did.”

What was Romney expecting, an ambush? At least one reporter at the event recognized the lunacy of that explanation, and asked Romney “Are you saying the President would stop you from doing this?”

“I just wanted to make sure we would be able to have this event without it being shut down,” Romney replied.

At the very least, the press ought to challenge Romney to substantiate the explicit charge he made against the President, that he has been sending minions to disrupt Romney events, and the implicit accusation that the President might have “shut down” Romney’s press conference, and ask if the sources for those accusations are ones that other people can hear.