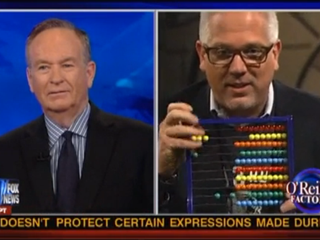 Glenn Beck paid his regular visit to Bill O’Reilly this Friday to call on Republicans to maybe consider giving the whole primary a rest and letting Mitt Romney prepare for a fight with President Obama. Noting that he had been supporting Rick Santorum, Beck told O’Reilly that he was fine with anybody but the President, and that he saw the race now as being “at the end here,” with a longer race potentially hurting the Republicans’ chances.

O’Reilly joked the “Republican race never seems to end,” to which Beck agreed and noted, “I think it’s time that it ends.” He noted that he was a Santorum supporter but, at this point, “it’s darn near mathematically impossible… for anybody buy Romney to take it.” If the race continues, Beck noted that he feared that, without a Republican strategy and unity, there was no hope in beating the incumbent.

O’Reilly noted, then, that Beck was all about defeating the President. “Anybody but Obama… could it be the Whig Party?” he joked. “It could be this!” Beck joked, holding up an abacus. O’Reilly then noted that he didn’t know whether the other candidates would agree with Beck that the time had come to drop out. “Ron Paul doesn’t have anything interesting to do, why would he drop out?” he noted. Beck was willing to defend Rep. Paul’s mission to bring awareness to certain issues, though O’Reilly still taunted him for wanting “to legalize everything, and gold, or whatever.”

The conversation ended with talk about Beck’s number one issue, the economy. “I think there will be a deep financial crash all around the world,” he argued, which made the election of a Republican that much more urgent when the time came.